In a candid conversation, Anil Kapoor talks about forging his own path, working with newcomers and how he manages to keep up at the age of 63. 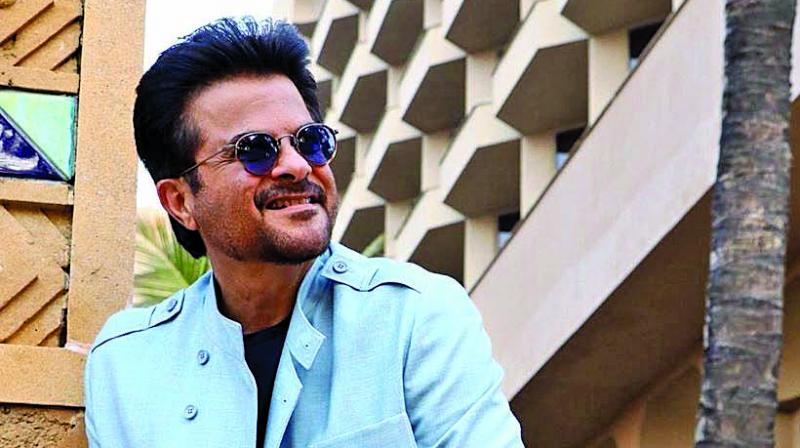 Anil Kapoor may be turning 63 this year, but he has no intentions of slowing down. The actor, who is always at his energetic best, reveals that the journey to reach here hasn’t been easy. Before becoming a household name from Woh Saat Din, Janbaaz, Mr India, Ram Lakhan and Tezaab, Kapoor dabbled in many films across the Hindi, Telugu, and Kannada industries before Hamare Tumhare was released in 1979. He gained recognition much later, after his 1984 release Mashaal, but was truly noticed in the industry only after Meri Jung (1985). “I did small roles here and there and met many people in the beginning. In my early days, I was figuring out what to do, but I am happy that I made correct choices,” says Kapoor, as he settles himself on a chair at a luxury hotel restaurant in Mumbai. The indefatigable actor adds that he has no plans to take a sabbatical. “I can’t predict as of now. But I have not taken a break so far and don’t know when that would happen. I live in the present and don’t think much about the future. I just go with the flow,” he muses.

The Fanney Khan actor is currently busy promoting his upcoming comedy film Pagalpanti, an Anees Bazmee directorial that also stars John Abraham. Bazmee has written several films like Diwana Mastana, Ladla, Andaz among others that starred Kapoor, but it was 2005 release No Entry when the actor colaborated with Bazmee as a director followed byWelcome franchise, and Mubarakan. “I have lost count with Anees. This will be a back-to-back comedy film after Total Dhamaal. I usually take breaks from what I have done in the last film, but you can’t plan things and have to lean on the universe,” he says, adding that his association with the director started coincidently when the actual director of the film fell ill. “Pahlaj (Nihalani) asked me if he can send Anees for the remaining shoot as he wanted to finish Andaz in that slot, and I said ‘Bhej do’ (send him),” he recalls.

Kapoor has maintained relevance via his versatility as an actor, having dabbled in a myriad of genres like drama, action, socio-drama, romance, and comedy. From playing unconventional characters such the ‘Angry Young Man’ in Benaam Badshaah to an autistic in Eeshwar, Kapoor has never shied away from experimenting and taking risks, which even took him to Hollywood with films like Mission Impossible: Ghost Protocol and Slumdog Millionaire.

“I kept on doing different roles, like I did some iconic scenes with Sridevi in Mr India. I kept trying to work with different directors so they can mould me into a versatile actor. I adapt to situations and try to make the right choices and raise my bar. Sometimes, people laughed at my choices, but at least I tried and took risks. I have never played it safe like others,” he reveals, adding that many dissuaded him from doing Eeshwar, Lamhe and Virasat, deeming them ‘slow’ films. “I experimented with my looks and avatars so much, which other actors didn’t do at the time. Today’s actors are doing this and that has become marketable, but I have always done it even when nobody talked about it,” he further says.

The actor has observed many changes in the industry, be it the acceptance of films, working style, or technology. “The kind of films being made now are like what we used to see in the 80s, and people are accepting it. Earlier, if you were shooting in a village, then people would say ‘that’s a marginal film, let’s go shoot in London and Canada’ but this isn’t the case now. With all the changes, I am enjoying my work more and also meeting more like-minded people,” he shares.  Instead of distancing himself from the new generation of actors, Kapoor also enjoys working with fresh talent. “It’s always great to work with newcomers. They infuse great energy into the team, and come with fresh ideas. Surrounding yourself with fresh faces and experienced people is a great mixture and it results in good output,” he feels.

Other than being known for his acting chops, Kapoor is also known as the ‘cool dad’ to his three children Sonam, Harshvardhan and Rhea Kapoor. “I am like friends with my children. We keep exchanging ideas and take positives from each other. All three of them are different,” reveals the actor. “The other day, Anupam (Kher) came to my house and said ‘you are a great father’ and kept insisting on it even after I asked him why. I told him I want to be better in every role, be it husband, father, professional, or as a human. You have to keep getting better and better,” he concludes.