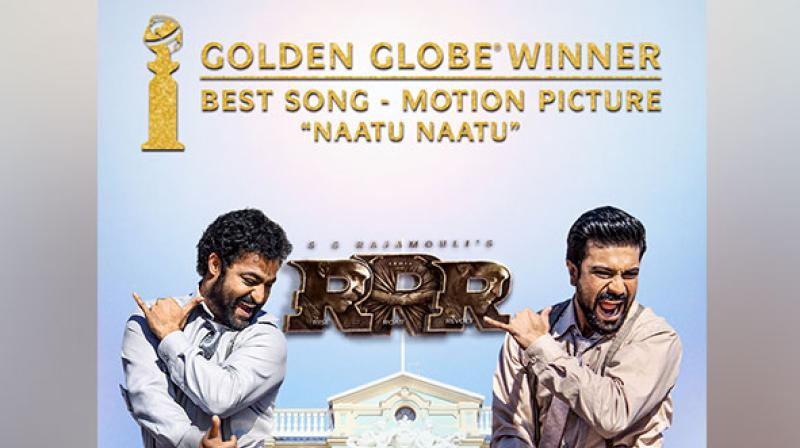 Los Angeles: "Naatu Naatu", the foot-tapping hit from SS Rajamouli's "RRR", danced its way to the best original song-motion picture win at the Golden Globes, but the Telugu blockbuster lost out to "Argentina, 1985" in the best picture-non English category.

The song, which celebrates the spirit of dance and friendship, beat out competition from the likes of Tylor Swift, Rihanna and Lady Gaga to register a win the Globes.

The win for best song bolsters the film's chances of striking gold again in the Hollywood award season, which culminates with the Oscars, the nominations for which will be announced on January 24.

"Naatu Naatu" has already made it to the 95th Academy Awards shortlist for best original song, along with 14 others.

Keeravani thanked Rajamouli for his "vision" as he accepted the award.

"It has been an ages old practice to say that this award actually belongs to someone else. So I was planning to not say those words when I get an award like this, but I'm sorry to say that I'm going to repeat the tradition because I mean my words.

"This award belongs to, in order of priority, my brother and the director of the movie, SS Rajamouli for his vision. I thank him for this constant trust in my work and support," Keeravani said.

"And NT Rama Rao Jr and Ram Charan for dancing with full stamina for the song."

Other nominees in the segment were Swift's Carolina (Where The Crawdads Sing), Ciao Papa (Guillermo del Toro's Pinocchio), Hold My Hand from Top Gun: Maverick, a collaboration between Gaga, BloodPop and Benjamin Rice, and Lift Me Up from Black Panther: Wakanda Forever by Tems, Rihanna, Ryan Coogler, and Ludwig Goransson.

"RRR" was hoping to convert its dual nominations into a win but Argentina's historical drama Argentina, 1985 emerged as the surprise winner in the category.

The film's team -- led by Rajamouli and its two stars Ram Charan and Jr NTR -- came to the red carpet of the Golden Globes in style.

While Ram Charan and Rajamouli opted for black Indian outfits, Jr NTR wore a black tuxedo to the award ceremony.

Prior to making his entrance to the red carpet of the Golden Globes, Ram Charan shared a group picture with the team on his Instagram page.

"THE #RRR FAMILY! On the way to the GOLDEN GLOBES @goldenglobes (sic)" the actor wrote in the caption. The team of "RRR" also included producer Shobu Yarlagadda.

At the red carpet, Ram Charan said it was a surreal moment for the film's team to receive two Golden Globes nominations.

"I have no words to explain all the hard work the whole team has put in. Coming from the south of India to the Mecca of films and being appreciated, it just gives us more energy to come back and do better films," he told The Hollywood Reporter

The 37-year-old Charan said he would love to work with top directors of Hollywood in future.

Jr NTR said the massive success of "RRR" was something that the team never expected.

"With Rajamouli, taking his track record into consideration, we definitely thought we had a winner. But this will be something more than a winner just a winner. Japan and today America, you don't expect this to happen," the 39-year-old actor told Variety.

"RRR", a lavishly mounted period epic, was the first Indian film in over two decades to be nominated for the awards.

The other two films nominated in the category earlier called foreign language film were "Salaam Bombay!" (1988) and "Monsoon Wedding" (2001), both directed by Mira Nair.

Directed by Rajamouli, "RRR" emerged on the global scene after its March 2022 release and received praise for the filmmaker's vision, high-octane fight sequences and Keeravaani's rousing musical soundtrack.

Over the past few months, the film -- which was released in Telugu, Tamil, Kannada, Malayalam, and Hindi -- received rave reviews from Hollywood biggies.

And last week, the movie made it to the BAFTA longlist for Film not in English Language category.