Akash Ambani and Shloka Mehta arrived hand-in-hand at the celebration which is being held at the Jio World Centre. 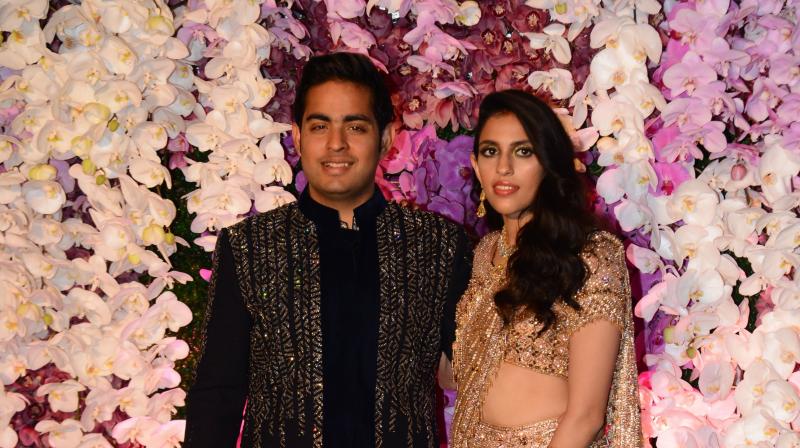 Mumbai: After a lavish wedding ceremony of Akash Ambani and Shloka Mehta, the Ambanis are now hosting a grand post-wedding celebration for the newlywed couple which is being attended by all the Bollywood celebrities and eminent personalities.

Akash and Shloka arrived hand-in-hand at the celebration which is being held at the Jio World Centre. The two made for a stunning couple dressed in ethnic outfits. Shloka looked like a vision in a beige coloured heavy traditional saree coupled with a gorgeous neckpiece and earrings. Meanwhile, Akash looked an absolute dapper in a navy-blue sherwani with white pyjama.

Ace badminton player PV Sindhu was amongst the first few celebrities to arrive. She was beautifully dressed in heavy embellished traditional attire.

Boney Kapoor was too spotted at the grand celebration dressed at his ethnic best.

Make way for the ever-so stunning Shilpa Shetty, who arrived with her husband Raj Kundra for the celebration. The couple looked regal dressed in traditional outfits posing for the cameras. 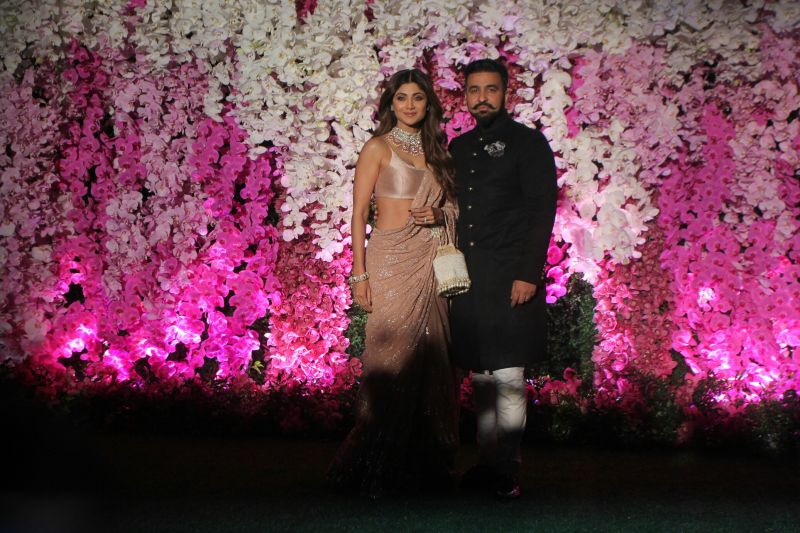 Shilpa looked drop-dead gorgeous in peach coloured saree with beautiful embellishments. She coupled it with a stunning neckpiece and kept her hair open in classic waves. 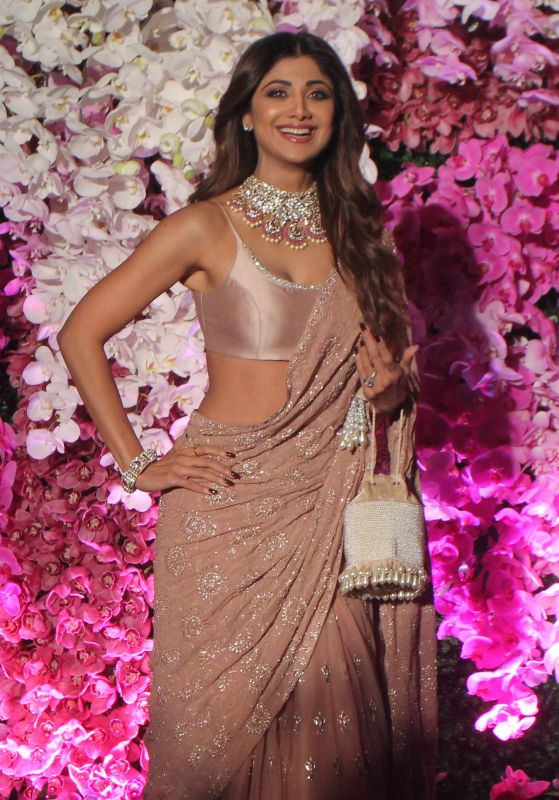 Karan Johar too arrived at the venue. The filmmaker looked like a complete dapper with his statement blingy coat coupled with black pants and a pair of shoes.

Riteish Deshmukh was also seen in attendance and looked handsome in an all-black ensemble. 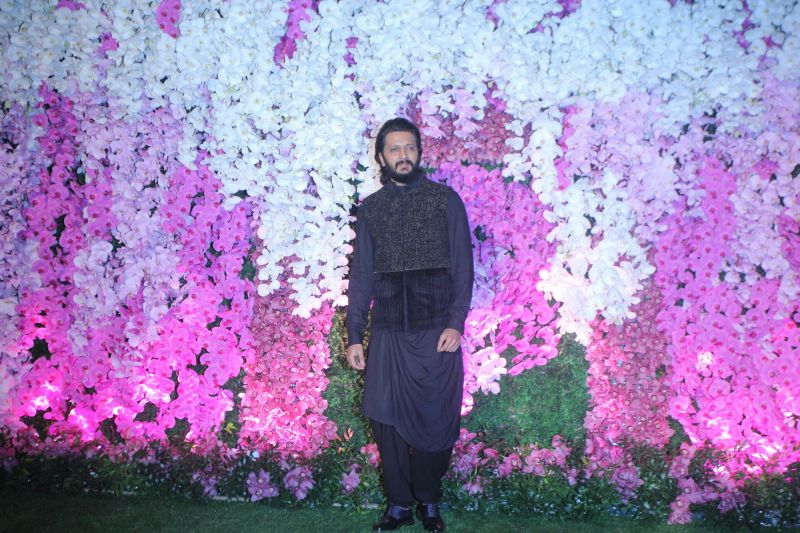 Suniel Shetty was also seen at the grand bash in a white shirt and black suit.

Abhishek Bachchan too arrived for the grand celebration with his ever-so stunning wife Aishwarya Rai Bachchan and their lovely daughter Aaradhya Bachchan. Aishwarya looked like a vision in heavy traditional suit and accessorised with minimal jewellery. While Abhishek chose to sport a white shirt and black suit. Aaradhya was dressed in an ethnic outfit and definitely stole all the limelight from her parents! 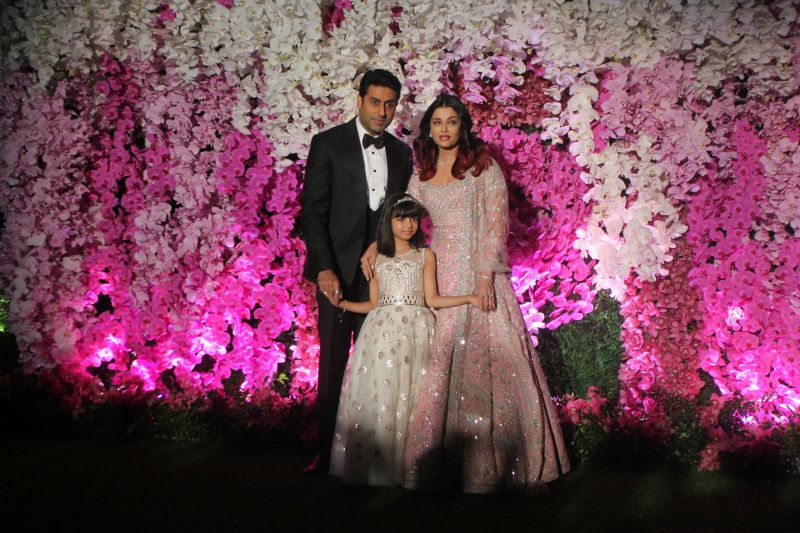 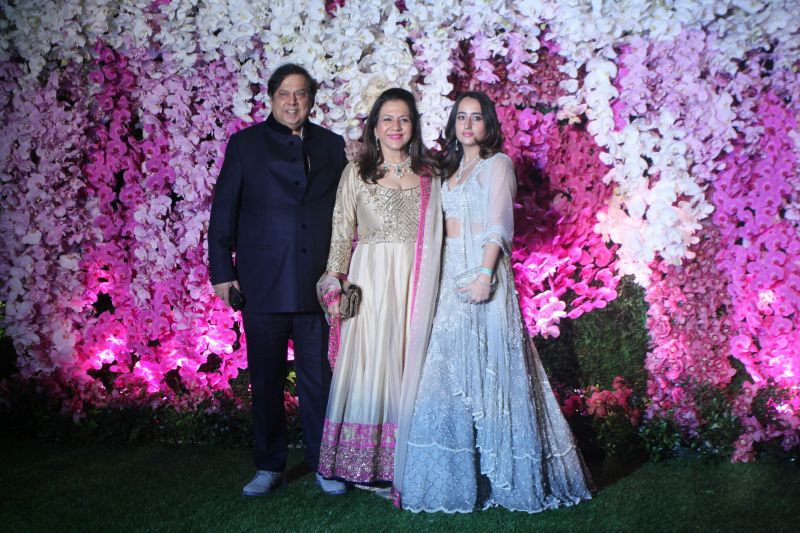 Ekta Kapoor was also spotted with her father Jeetendra. The two were dressed in traditional attires and posed for happy pictures together. 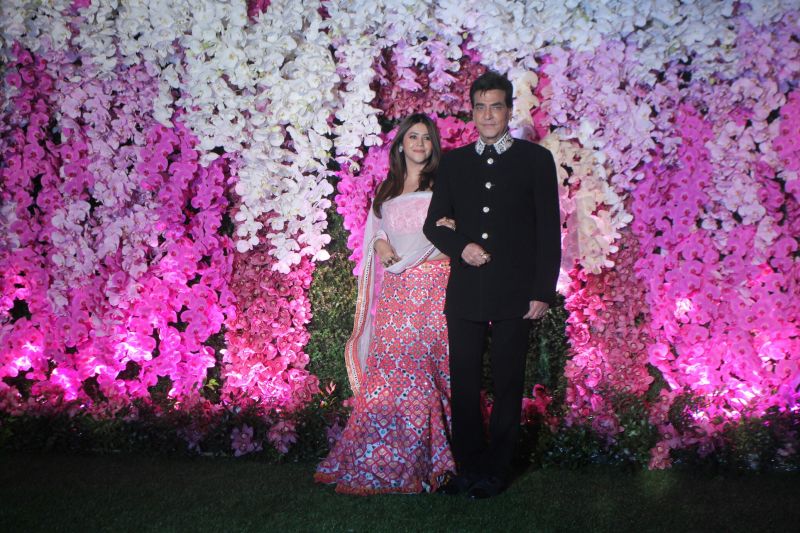 Sonali Bendre too arrived for the reception with husband Goldie Behl. This is her first appearance at a wedding after returning from New York where she was receiving treatment for cancer. 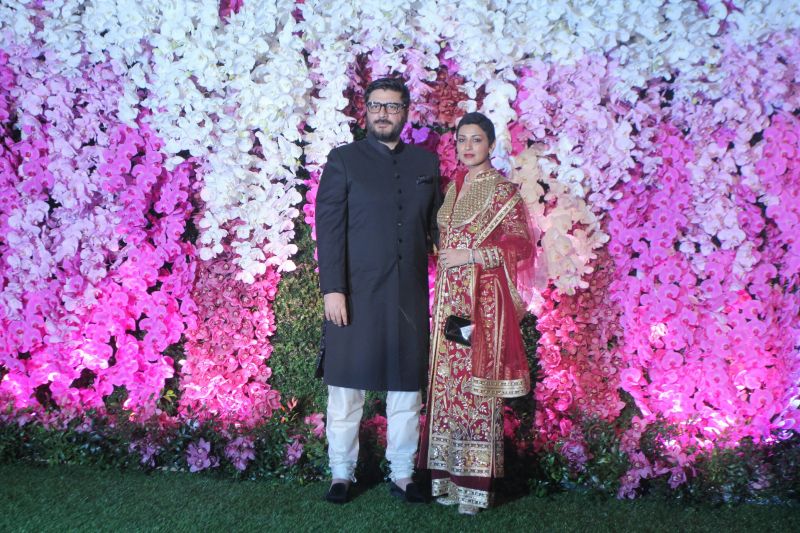 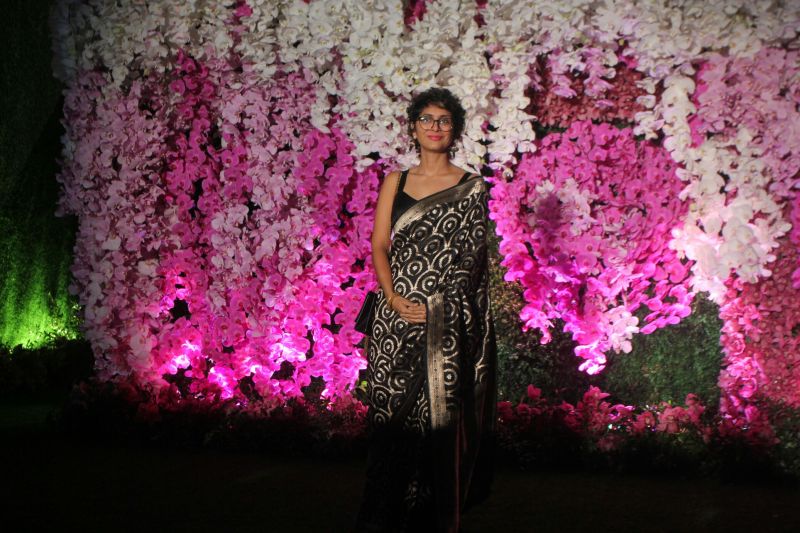 Kriti Sanon was also seen in attendance and looked pretty in a pink coloured lehenga with beautiful detailing. The actor kept her jewellery minimal by just wearing a set of earrings which complimented her look perfectly. 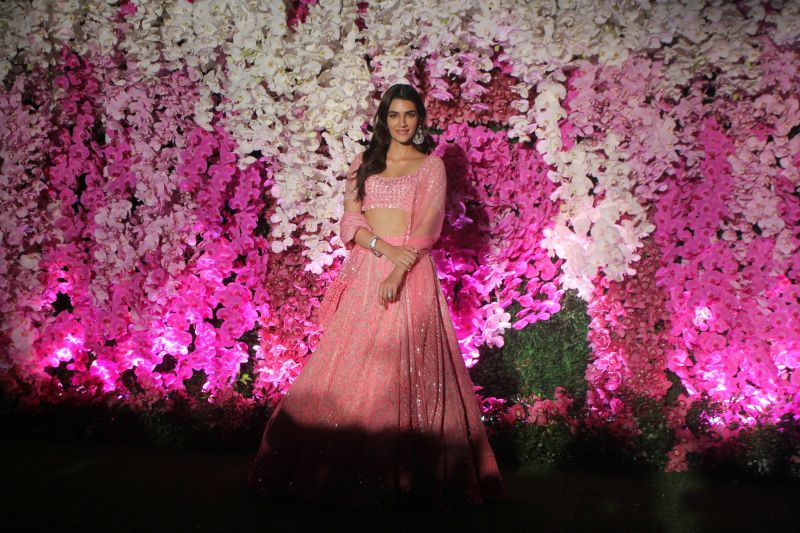 Amitabh Bachchan also arrived for the grand celebration and was accompanied by his daughter Shweta Bachchan Nanda. The father-daughter duo donned traditional outfits. 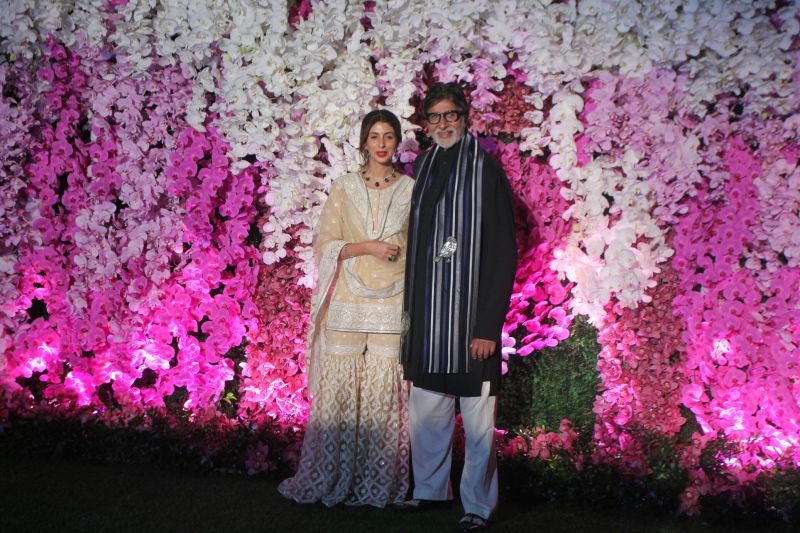 The ever-so-gorgeous Malaika Arora was too spotted at the venue looking like a total stunner in a heavy ethnic lehenga accessorised with a traditional choker. 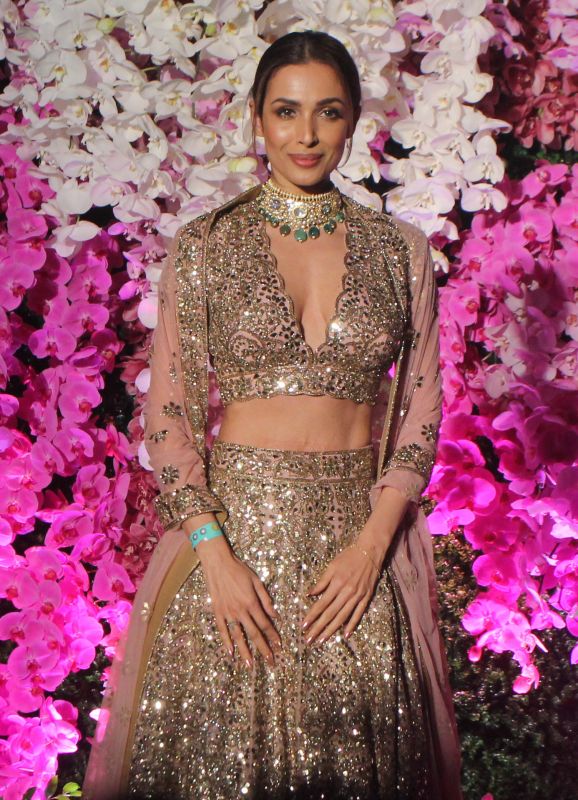 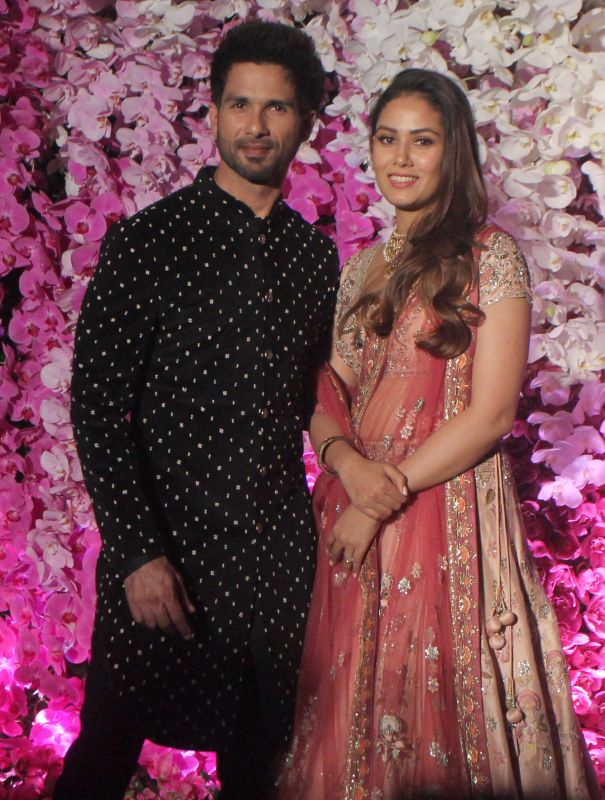 The ever-so-elegant Rekha was also spotted at the grand bash and was accompanied by Manish Malhotra. Rekha looked beautiful and graceful in a heavy traditional saree with stunning jewellery which added the perfect amount of oomph to her whole look. Manish too opted to wear a traditional ensemble for the celebration. 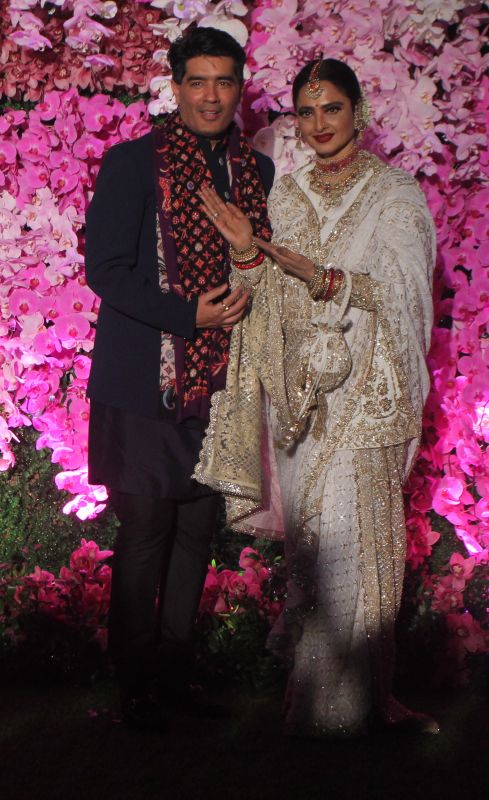 Kajol too arrived for the celebration and looked beautiful in a golden saree and heavy traditional neckpiece. 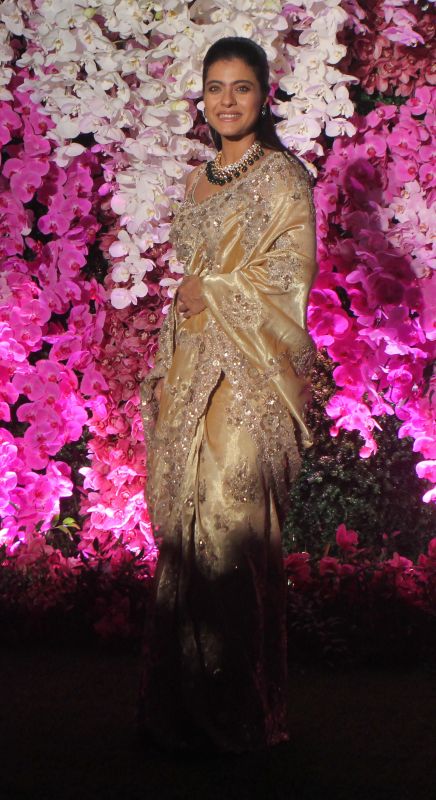 Some other celebrities seen in attendance were Akshay Kumar, Dia Mirza, Juhi Chawla, Anu Malik, among many others.

On Saturday, Akash and Shloka tied the knot at the Jio World Centre in Mumbai. The ceremony saw many Bollywood A-listers including filmmaker Karan Johar, actors Ranbir Kapoor, Alia Bhatt, Deepika Padukone, cricketer Sachin Tendulkar, Ajinkya Rahane and many other international stars, who attended the wedding in their most stunning outfits.

According to various media reports, another wedding reception will be held on Monday at the same venue. The pre-wedding festivities of the grand wedding started about a month ago as the Ambanis and Mehtas hosted a grand bash in Switzerland, which was attended by the A-listers of B-town including Aamir Khan, Shah Rukh Khan, Karan Johar, Alia Bhatt, Ranbir Kapoor, Malaika Arora, Arjun Kapoor, among many others.

The couple’s engagement took place at their residence on June 30, 2018.