The actress, who will soon be seen in Steven Spielberg’s web series Halo, talks about the project and her willingness to take risks. 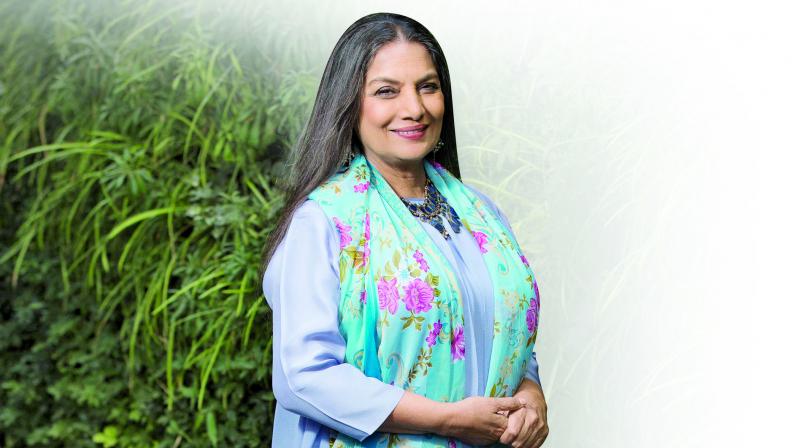 A stellar performer and an artist par excellence, Shabana Azmi has now bagged an international web series named Halo, which is to be produced by Steven Spielberg’s Amblin Entertainment.

The Arth actress, who has done Hollywood films in the past, is thrilled about this new phase of her career. “It is not a usual project for me, because the format is so different. Halo is an extremely popular game, and since this announcement, hundreds of people have been ringing me up and telling me how their kids love it, etc. I didn’t know anything about it. I am getting a chance to enter an area that I never have before, so for me that is the most exciting thing. I am looking forward to that. It will be a completely different experience,” she shares, adding that she will head to Budapest in the last week of October for the shooting.

In the past, Azmi has been a part of several international projects, including Madame Sousatzka, La Nuit Bengali, City of Joy and Son of Pink Panther. She has also starred in TV shows like Banglatown Banquet, Capital and Next of Kin, which is a six-part series. Talking about the digital space, the actress says, “For me, acting is basically liberating, and the medium can be different. Whether it is a live performance, TV, or a digital medium, the process that you have to go into to create a character is essentially the same, after which you tweak it. For me, the most exciting part of this is that more than 20 years ago it was like ‘why should all the best parts only go to the white people?’ It took all this time to become a reality which I feel great about.”

She adds, “The world is shrinking and becoming global, particularly in the entertainment world. For us it is wonderful that such meaty parts are being written, and we are getting opportunities to play them.”

The 68-year-old actress continues to stay relevant in today’s day and age, and she finds that staying relevant is important. “It is extremely important to stay relevant, and that can only happen along with your career if you had the guts to take risks. If you have taken risks, only then you can remain relevant. Because if you stayed in your safety zone, did what you knew, and never risked failure, then that will never happen,” she explains.

Azmi adds that her greatest strength is not being afraid of failure. “I am willing to try something new; I may fail but at least I tried. A lot of us just want to be secure in our cocoon, and they say ‘Who will try something new? What if I fail?’ I have taken a lot of risks, and the time was right. Luck also has to do with it: It’s not just talent, it is also about being at the right place. I probably have worked with the largest number of new directors. I have taken several risks and remaining relevant is so important,” she shares.

The actress’ choice of films has always been ahead of its time. Be it Arth, Fire, or Godmother, her films remain pertinent even now. She attributes this to her parents and her mentor Shyam Benegal. “It is shaped by my background,” she says, adding, “I was shaped by the fact that my parents were both artists, and I was shaped by some great creative people. Shyam Benegal was my mentor. Also the fact that I am a formally trained actor, and the films that I wanted to see was world cinema that was not available in India at that time. If I had not gone to film institute, I would never have been able to see the kind of films I saw. Obviously, my aesthetics have been shaped by all of that. Let us not forget that I have been very lucky.”

She thinks that the present environment is good for actors. “Now is the best time for actors. In fact, even mainstream actors are ready to do projects that are not considered commercial hits, but they do so. I think it’s a good period,” she opines.

Finally, when asked about her thoughts on working with Steven Spielberg, Azmi gushes, “I think as actors, of course you feel very pleased and happy. But that should not be your consideration. My consideration now is that this is a completely new thing that I am doing, and I must give it my best. My full concentration is on that, and not how the results are going to come out. That’s of prime importance to me,” concludes the actress.