He lends his voice to Shah Rukh Khan in a song from the film Zero. 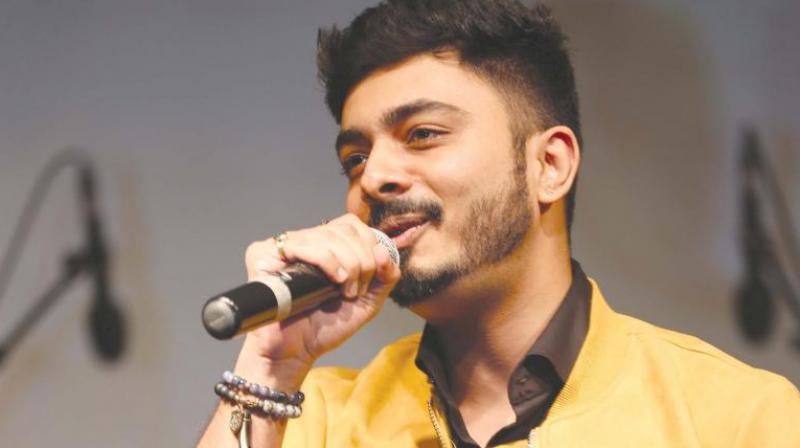 When your voice goes viral across the country, it’s a phenomenal feeling. And when you realise that your voice is being used for superstar Shah Rukh Khan, the feeling is nothing short of overwhelming. Crooner Abhay Jodhpurkar is on a high and deservedly so. The singer’s song Mere Naam Tu from Anand L Rai’s movie Zero has received tremendous appreciation.

“I’ve never received so much love before in my life. This song happened to me at a point when I was having an existential crisis and was wondering if I was (going) in the right direction. But this has shown me that playback singing is my ultimate calling. It’s a really emotional moment for my family and I,” he smiles gratefully.

About the Garden City, the lad who has already sung for two hit Kannada movies says, “I loved Lal Bagh, Iskcon Temple, Bangalore Palace and eating at Maiyas!”

Talking about how Zero happened, Abhay reveals, “I had stepped out of a temple when Ajay-Atul (music directors of Zero) called and asked me if I could go to Mumbai to record a song. I was told that they’re just trying a song and may not end up using it. The composition resonated with me at that point of time as I was vulnerable and going through a heartbreak. I had a sense of attachment to it and poured my soul into it.”

On SRK’s birthday, when the trailer of Zero was launched, Abhay found out that his voice had been used in the film. “I saw it and broke down when I realised this was actually happening. Ajay-Atul wanted to surprise me and my family and that has been my best Diwali so far. My voice matched Shahrukh Sir’s, so that was a blessing in disguise — this was a beautiful answer by the universe that this is my ultimate calling,” recalls a visibly emotional Abhay.

As for his tryst with music, the lad from Sendhwa states that although the passion for music ran in his family, he never took it seriously. “I wasn’t sure about myself, but my grandfather always said — you’ll be a legendary singer one day. He was the one who developed my taste is music. In fact, I wanted to pursue a degree before starting out as a singer, but my parents wanted me to pursue music from the very beginning!” says the singer who speaks of the Garden City with fondness.

When Abhay moved to Chennai to do his BTech, he was exposed to Carnatic, South Indian film music and more at KM Music Conservatory.  “I was a part of the Qawwali batch and AR Rahman Sir spotted me at a concert where I sang just one line and soon, I was picked to sing Moongil Thattam for Mani Ratnam’s movie Kadal, which received a great response. When Rahman Sir picked me out of nowhere, I realised I may have been meant for this. Ever since then, I’ve sung more than 100 songs in South Indian languages and Marathi,” says the singer who did his schooling in Indore.

As for Sandalwood, Abhay first lent his voice for AR Rahman’s compositions in Godfather.  “I then worked with Anup and Nirup Bhandari for their first film Rangi Taranga. They were extremely sweet and gracious  about flying me down and the song Ee Sanje did really well. I’ve loved singing for Kannada films despite not knowing the language. When you get appreciation from local people, it’s a precious feeling  — my hard work lies in perfecting these languages.”

While the artiste has a lot of releases lined up, he’s currently savouring all the adulation  he’s been receiving. “Hopefully, you will get to hear a lot of songs in my voice — I feel more responsibility now,” says Abhay, whose biggest musical inspirations are Mohammed Rafi and Shreya Ghoshal.  “I have a lot of dreams and as an artiste, I want to explore photography, videography, directing and more, “ he signs off.