After public row, Kangana, Karan come together on same platform; here's what happened

The actress made an appearance on the filmmaker's TV show 'India's Next Superstars' on Thursday in Mumbai. 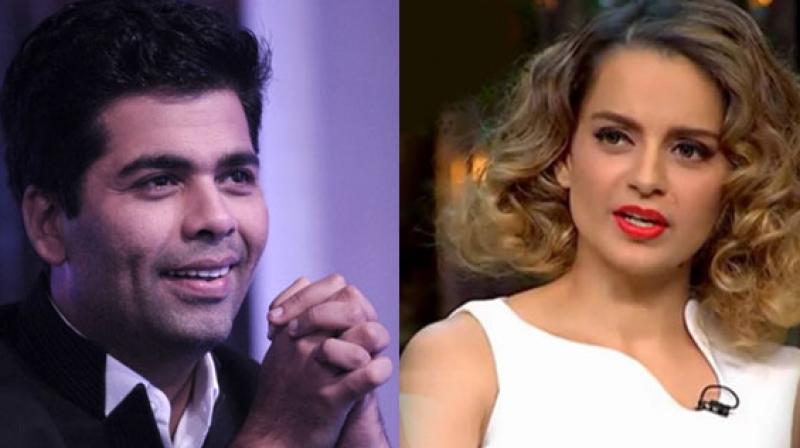 Kangana Ranaut and Karan Johar have worked together in 'Ungli.'

Mumbai: After going at each other over the issue of nepotism last year, Kangana Ranaut and Karan Johar have ended their differences in an amazing manner.

The two stars have finally called a truce and hugged each other on the sets of the latter’s TV show ‘India’s Next Superstars’ on Thursday.

Dressed in a stunning red outfit, the actress didn’t show any signs of unease in Karan’s company, unlike recent times when the two came close to bumping into each other at various events, but still got snapped together.

According to a report in entertainment portal Spotboye, the duo also played the ‘How well do you know each other?” game during the shoot.

Kangana bluntly calling Karan ‘the flag-bearer of nepotism’ and accusing him of ‘running a movie mafia’ on ‘Koffee With Karan’ had sparked their row, and the questions about his TV show were inevitable.

Kangana was asked what Karan serves his guests on the TV show and the actress joked, "Zehar pilata hai mujhse pooch (serves poison to his guests, ask me).”

The comment saw everyone on the sets bursting out in laughter, and Karan initially surprised, also cracked up.

The incident reminds us of the KWK episode when Karan laughed off all the verbal attacks on him by Kangana, before retorting days later.

We hope something similar doesn’t play out this time.