Why has Bollywood divorced handlooms?

Even though I am non-filmy, I still bought similar looking sarees several years later when I found them by chance. 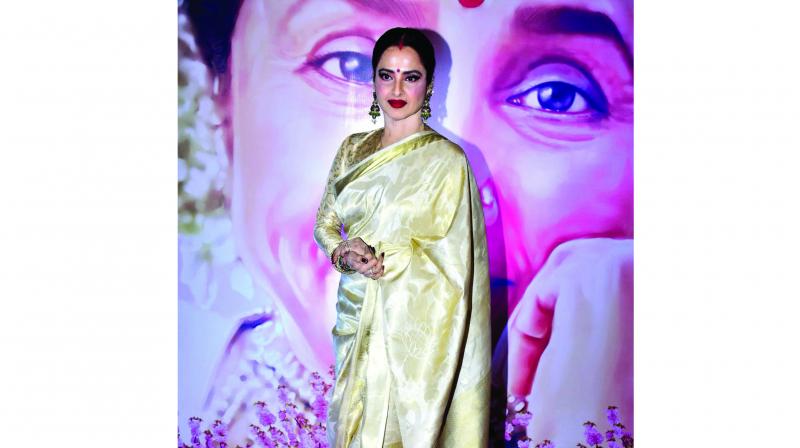 Like virtually all Indians, I love Bollywood. I love a tale well told, I love how I can sit enthralled watching the magic of the silver screen unfold, I love masala films even more if they are aesthetically put together. I am happy to stick my head in the sand to many lacunae as long as they are easy on the eye. I also promptly forget them the moment they are over, most often not even remembering the names of the films, let alone actors. But what I will remember to its last vivid detail will be a beautiful saree they wore. My problem is this is increasingly so rare to find a memorable saree that I find myself seeing old movies just to admire the sarees they wore! But then I am an extreme case!

I remember with vivid detail my earliest fashion icon Jaya Bhaduri ne Bachhan in the vivid red Banarasi saree as she sang Bole re papihara in the cave in Guddi while it poured outside…or her off white Kanjivaram saree with a mauve border as she dimpled at Amitabh Bachchan in Abhiman singing Teri bindiya re… or her off white and black bordered Kanjivaram as she sang Ab toh hai tumse har khushi apni… or more recently, her “Kabhi Khushi Kabhi Gham where she wears an exquisite chikan saree in off white or a stunning black parsi gara embroidery saree in the same film. Even though I am completely non-filmy, I still bought similar looking sarees several years later when I found them by chance. The point I am trying to make is that these are memories that stay for a lifetime. 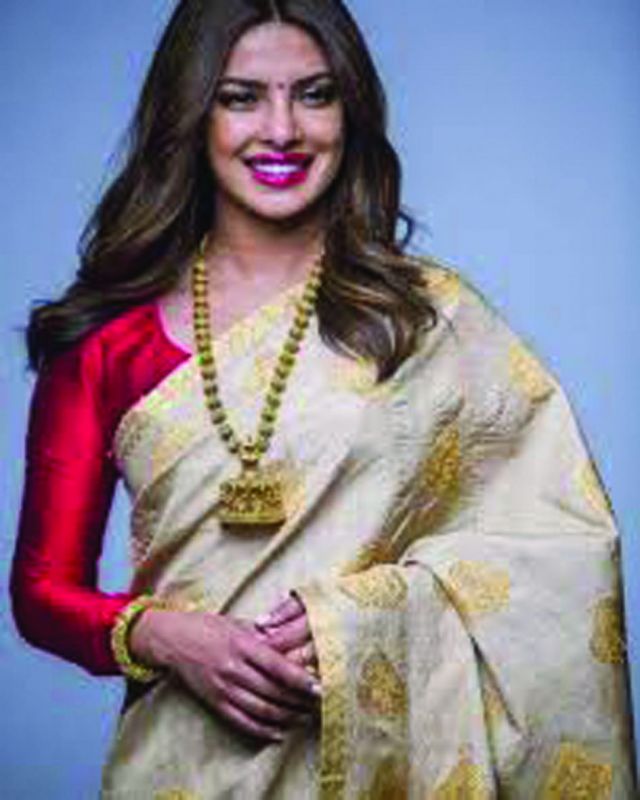 One can also argue that these are “costumes” in keeping with a look of the film and are reflective of the times, we live in. Yes and no. Yes they are costumes and they are also clothes that the audiences are able to relate to as well. After all the idea is to make believe the “make belief”. And since they create such powerful visual statements, it makes it that much important that the messages that they give out are the right ones.

The recent reason for my angst is my recent net surfing of the Ambani scion’s engagement. It had the veritable who’s who of Bollywood divas arriving for some inexplicable reason on millions of sequins per square inch plastered on some flimsy synthetic fabric looking like clones of each other in hues of deathly pastels. It looked like they were all dressed by the same designers or perhaps there was a dress code. Like some assembly line productions in frilly and silly clothes they all looked. I wondered why on earth were they wearing those soufflé like concoctions that did nothing for their skin tones. Those pastel colours are in any case so partial to the fairer skin tones that it will perpetrate the fair and lovely image and do an actual disservice to the more real Indian skin tones. We are a nation of colours, of textures, of gorgeous traditional motifs that have been woven into textiles for thousands of years. It is almost like cultural terrorism of sorts to see this blingy synthetic perpetration. 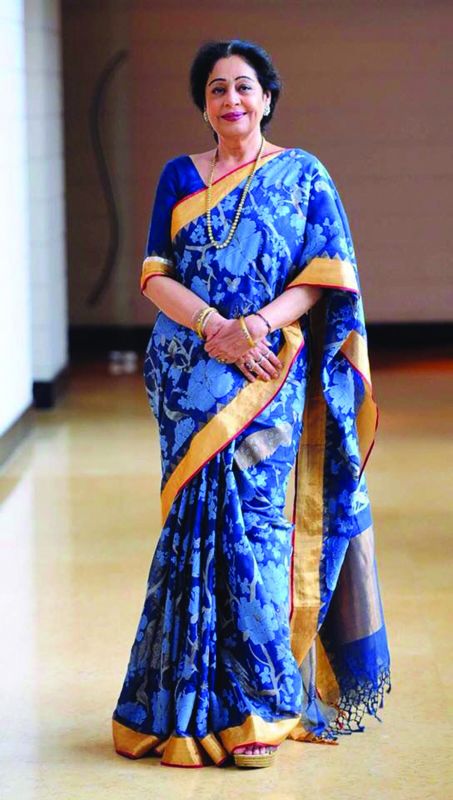 I remember with great fondness Smita Patil and Shabana Azmi wearing exquisite handloom sarees both on screen and off screen in the late 70s and 80s. In fact the duo almost single handedly set off the trend for handlooms from Bollywood. Of course it helped that most films of the genre of parallel cinema made during that period too sported that “look” and Pupul Jayakar and Kamaladevi Chattopadhyaya were around.

Since they are icons followed by millions, and India has such a glorious tradition of handloom weaves why can’t they do their bit at least off screen since they have to go by the “look” in the film by sporting our heritage at least in public situations? Given their fan following, if they patronise Indian weaves, they might actually help revive a fading industry and support sustainable fashion in the bargain. No, not for a minute am I suggesting any curbs on sartorial choices and freedom to wear what they want, but just the way we aspire to leave a smaller carbon footprint and be socially and environmentally responsible, I wish the icons who have the ability to change how sarees and handlooms are perceived by audiences would do it. My elation on seeing Priyanka Chopra wear a stunning zari muga saree as brand ambassador for Assam turned to zilch when I never saw her wearing any other handloom ever afterwards. In fact some site was selling a look alike calling it a chanderi!

My point is why do we not take pride in our magnificent textile heritage? A gorgeous Kanchipuram or an intricately woven double Ikat from Gujarat or Odisha or an even a Paithani elevates the wearer to a new level of sartorial elegance even on the red carpet. The exceedingly foolish fashion police outshouted poor Vidya Balan as she wore Sabyasachi designed outfits on the red carpet in Cannes. I feel she could just as well have worn better designed blouses and great patola or ikat and outshone everyone anyway. Look at Rekha or Kirron Kher, they have everyone drooling with their styling and resplendent sarees – they wear the perfect sarees, they wear the right jewelry, their attitude, sense of style is worthy of being emulated in a big way by Bollywood actors.

But having said that, I have the greatest respect for our classical dancers and musicians for sporting our heritage both on stage and off stage for the men are seen in handloom kurtas and shawls and the women in outstanding, fabulous sarees with other styling firmly in place. Even if means extra efforts to iron their sarees and outfits during concert tours, they do it. However I see a dangerous trend with kathak dancers, especially Mumbai based ones, taking recourse to synthetic textiles in their costumes. I feel it is a big put off. But of that another time.