Priyanka lost films as she said no to harassment: Madhu Chopra 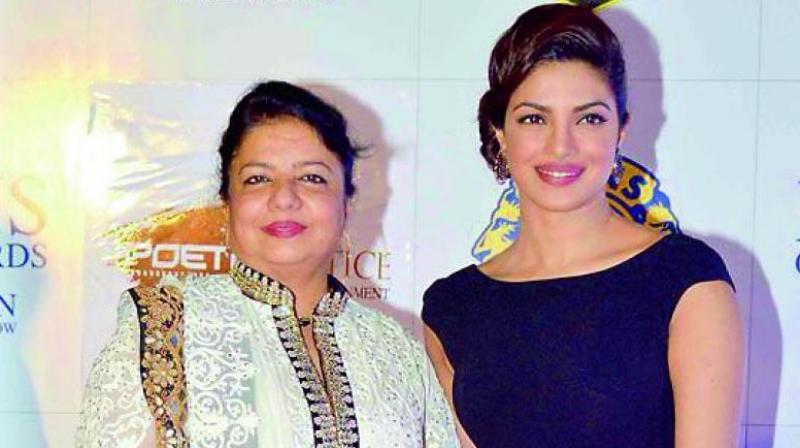 Doctor, producer and mother of global icon Priyanka Chopra, Madhu Chopra, is a jury member for the  ongoing 20th International Children’s Film Festival in Hyderabad currently. We catch up with her for a quick chat.

A house of talent
Madhu and Priyanka work closely to make different kinds of movies under their production house, Purple Pebble Pictures. “We joined hands with CFSI for three children’s films  Pahuna deals with the refugee crisis in Sikkim, Taj explores the relationship between a little boy and a street pup he rescues and a movie in Assamese is based on a true story and revolves around the only female mahout in the country and her search for her pet elephant that is sold off by her parents,” says Madhu. She further reveals, with much pride, that all the three films are helmed and written by women.

Women at work
Another commendable thing about Purple Pebble is that it always encourages newcomers. Madhu shares, “We encourage newcomers and definitely women. They are sensitive. I don’t say that men aren’t but they take the help of women to bring out that sensitivity. We look at men as strong people who are not supposed to be sensitive. I am for gender equality but I must say that we need to give women the opportunity they lacked for so long and I am sure they will ace it. Sixty per cent of my employees are women.”

Madhu also reveals that her daughter, despite an uber-busy schedule, FaceTimes her every day. “I am a hands-on producer but my tutoring happens with Priyanka. Creatively, the final outcome is completely hers. I look after the finances and legal aspects,” she says, adding, “We have a team that takes care of the scripts and picks what gels with our company’s principles and then it is sent to Priyanka. She gives the ultimate green light.”

Your life, your rules!
Madhu believes one shouldn’t compromise on values. A few weeks ago, Priyanka stated that there are many Harvey Weinsteins in Bollywood. Spelling out two instances that her daughter faced and fought, Madhu says, “She was just 17 when she entered the industry, so I accompanied her every minute of the day till about three years ago. So a gentleman meets her and says: ‘Will your mother sit outside while I narrate the story to you?’ Priyanka told him, ‘If it is a story that my mother can’t hear then it is a story that I cannot do.’ She walked out of that project — a prestigious one.

“Another time, a designer told her that the director’s brief was to dress her in itsy-bitsy clothes. The director had said, ‘What is the point of having a Miss World in front of the camera if we cannot show her as her beautiful self?’ Priyanka refused to do the film. It was being helmed by a reputed director and he got upset. Priyanka lost 10 films because she walked out of that project. But she didn’t care. That is what I say to everyone. This is not the end of your life. Your life is more valuable.”

Madhu adds that PeeCee didn’t face this in Hollywood. “They gave Priyanka a lot of respect. If you live on your own terms, the struggle is bigger but the outcome is sweeter too. This is my advice to every girl. Do not compromise and life will be sweeter for you.”

Educate to kill vulgarity
Addressing obscenity in films during the forum discussion, Madhu opined that change will happen only if mindsets change. Expatiating on the topic, she said, “You cannot stop people from doing or watching certain films. If there is demand, there will be supply. Educate the men of the country to cut off the demand. Educate the perverts who enjoy obscenity.

“As for the film industry, I know that Priyanka came as Miss World; she was at a position of advantage. She didn’t struggle. She didn’t go through the bad patches. The most important thing to inculcate is that this is not the end of life. If you don’t want it then say no. You have many other career choices. Some people may have entered the industry as a desperate measure. My advice to them is ‘stop’. Do not succumb to any pressure. Don’t go against your conscience or values.”

Finally, talking about how proud she is of Priyanka, Madhu says, “She carries India with herself wherever she goes. She talks about the country and greets everyone with a namaste. I feel proud of her. Being one of the most powerful women (as listed by Forbes) is a matter of perception. Again, it makes me proud that some people think she is more powerful. Let’s see the superwoman coming out of her!”