He feels that an Indian context with our stories and our actors can be easily used to compete with the West. 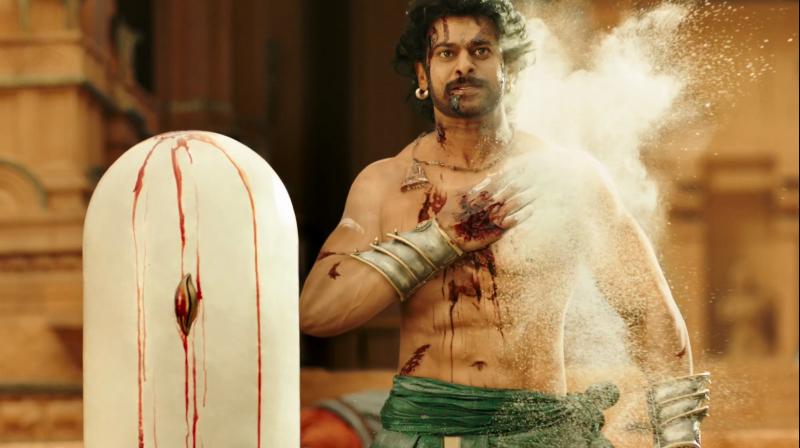 Prabhas is the lead actor in 'Baahubali: The Conclusion.'

Hyderabad: Dozens of animators work into the night in India's southern city of Hyderabad, fuelled by caffeine and huddled over computer screens in a darkened studio to put the finishing touches on India's biggest and most ambitious film.

The makers of 'Baahubali 2' hope its top-notch visual effects will wean Indian audiences from Hollywood blockbusters, enticing them with the magical kingdoms, rampaging armies and towering palaces of a homegrown fantasy epic.

"If art was easy, everybody would do it," said Pete Draper, co-founder of Makuta VFX, which is stitching the film's live-action scenes together with computer-generated imagery.

"Every single shot has its own challenges. Working hours right now are crazy. We are finishing daily at 4 a.m."

Agencies that closely track the box office say 'Baahubali 2' is the most highly awaited Indian film of the decade. But the competition for Spider-Man and other movie franchises from overseas isn't coming from Bollywood.

When it opened in cinemas in 2015, dubbed versions of 'Baahubali: The Beginning', made in the Telugu language widely spoken in India's southern states of Andhra Pradesh and Telangana, resonated with audiences nationwide.

It used computer-generated imagery to depict ancient kingdoms and bloody wars in a quintessentially Indian battle of good versus evil.

Film-maker S.S. Rajamouli aims to do even better when the next instalment is released on April 28.

Inspired by Hollywood epics such as 'Ben Hur' and 'The Ten Commandments' when growing up, Rajamouli wanted to create a tentpole franchise that delivered a memorable movie experience.

But younger audiences were looking to Hollywood franchises such as 'The Fast and the Furious', and the superheroes of the Marvel and DC Comics universe for the big-screen thrills Indian cinema was unable to provide.

"They have heavy budgets, they have huge star casts and huge studios backing them," Rajamouli, 43, said in an interview in Hyderabad, his home city.

"But if we make 10 percent of it in an Indian context, with our stories, our heroes and heroines ... we can easily compete."

Visual effects head Draper was at the sprawling movie set every day of filming to make sure location shots and actors' movements synchronised with CGI-enhanced rendering on screen.

By day, the half-built palace, an arena, the torso of a statue and a stone temple flanked by blue screens don't look sufficiently formidable, so the team of nearly 80 animators has been given the task of fleshing out the heft and detail.

To keep down production costs on a budget of $67 million, work on the CGI-heavy movie was distributed among 35 studios across continents.

"We didn't have any studio backing us. Raising capital was a challenge," said Prasad Devineni, one of the producers.

If all goes well, a record-breaking run for 'Baahubali 2' would be a wake-up call for Bollywood, where cinema attendance has halved from a decade ago.

Bollywood, reliant on a tried-and-tested formula of romances and masala thrillers, has failed to develop its own big-ticket franchises, piggy-backing instead on 'Baahubali', with top producer Karan Johar marketing the movie in Hindi this month.

With a spinoff TV series, an animated offering for Amazon videostreaming, a comic book and a possible third film in the works, 'Baahubali' could lure back Indian audiences.

"It has shown us the way - how to market, build euphoria around it," said Rajkumar Akella, India managing director at global box-office tracker comScore.

The makers always envisaged the film as a franchise, with many narratives branching off its storyline, to hook the maximum number of viewers later. "Our audiences might be watching English films, or Hollywood films, and getting used to them, but the blood doesn't change, the DNA doesn't change," said Rajamouli.