Deepika bonds with Rishi and Neetu

The actress who dated Ranbir Kapoor a few years back, still shares a good bond with his parents. 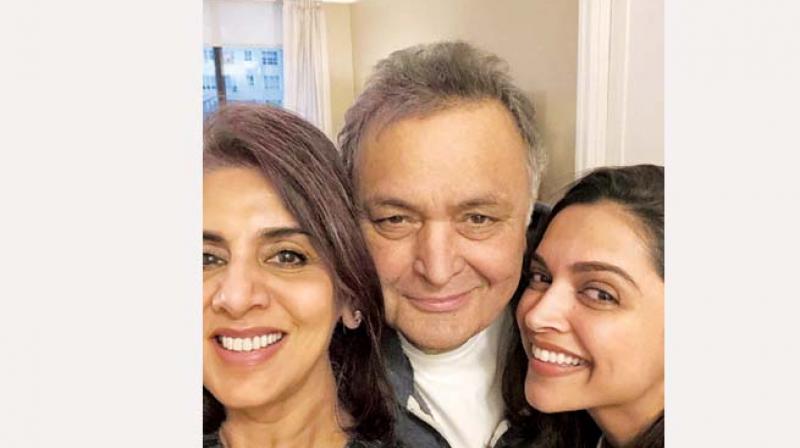 Though Ranbir Kapoor and Deepika Padukone have parted ways and have moved on in their lives, both still share a lovely relationship. Time and again, both the actors have shown respect and admiration for each other. Recently, Deepika Padukone spent some quality time with her ex-boyfriend Ranbir Kapoor’s parents Rishi and Neetu Kapoor. To share the moments spent together, Neetu Kapoor took to Instagram and posted a beautiful picture that shows their lovely bonding. Deepika looks happy and radiant in her casual white top as she smiles while posing with the couple. In the picture, Deepika is seen embracing Rishi Kapoor and Neetu is seen on the other side of Rishi. Neetu captioned the picture as, “Such a fun evening with adorable @deepikapadukone .. gave lot of love n warmth.” Well, isn’t this a wonderful gesture from Deepika’s side?  We cannot get enough of these beautiful pictures.

In her most-recent celebrated outing, Deepika Padukone was seen wearing a Zac Posen designed metallic pink jacquard gown embellished with 3D printed pieces at the 2019 MET Gala. Her dress matched this year’s theme of the MET Gala — Camp: Notes on Fashion, which was inspired by an essay by Susan Sontag published in 1964. This was Deepika’s third appearance at the MET Gala since she made her debut in 2017 at the Met Ball.

On the work front, the Padmaavat actress is busy shooting for Meghna Gulzar’s film Chhapaak. Deepika will be essaying the role of an acid attack survivor. The film is scheduled to release on January 10, 2020.