She's seen sharing a scene with actor Adam Devine in the video, and the comedy flick is slated to release on February 14, 2019. 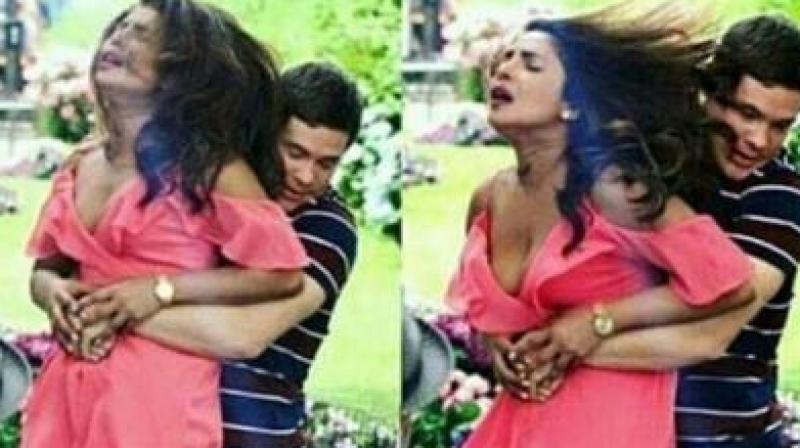 Priyanka Chopra with Adam Devine on the sets of 'Isn't It Romantic?' in New York City. (Photo: Instagram/priyankafanclub)

Mumbai: Our desi girl and glamorous Priyanka Chopra is slaying it in the West, be it movies or fashion quotient, she’s winning it all.

Starting with seasons of television series ‘Quantico,’ the babe received her first Hollywood movie- ‘Baywatch’ with Dwayne Johnson and nailed the antagonist’s character like a pro. Applauded for her role, the actress soon got her second project ‘A Kid Like Jake,’ for which she has already shot.

It was just a few days ago, that PeeCee’s third movie ‘Isn’t It Romantic?’ was announced, where she will be seen playing a yoga ambassador alongside Rebel Wilson, Liam Hemsworth and Adam Devine.

The actress has already begun shooting for it in New York, and few pictures and a video have already got leaked and are going viral in no time.

In the video surfaced on the Internet, Adam is trying to help Priyanka, who feels choked, using the Heimlich manoeuvre.

However, it’s the way the video has been shot makes it look sleazy.

As per a leading agency, ‘Isn’t It Romantic?’ will see Wilson play an architect Natalie from NYC (New York City), Hemsworth will be essay the role of Blake- a handsome client. The film surrounds around Natalie who works hard to get noticed at her job but ends up being treated as an intern.

Directed by Strauss-Schulson and screenplay by Erin Cardillo, Dana Fox and Katie Silbrman, and Paula Pell, ‘Isn’t It Romantic?’ is slated to release on February 14, 2019.

Here are some of the stills from the video and pictures which are doing the rounds on the Internet:

Some more pictures of the actress from the sets: