Sridevi passed away on February 24 in Dubai, where she went to attend a family wedding. 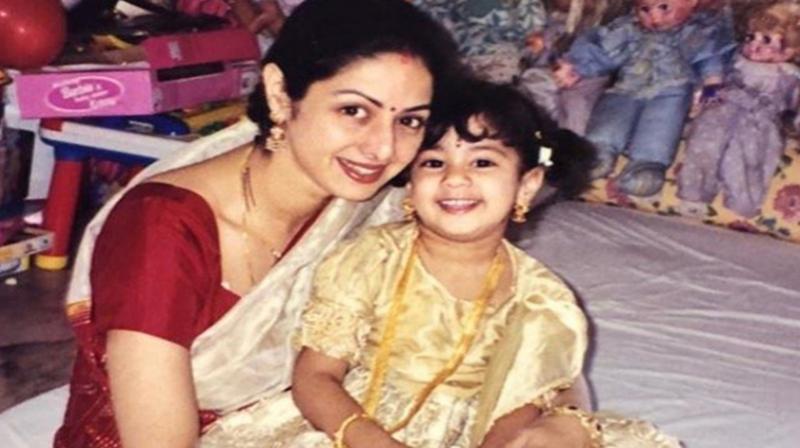 New Delhi: Sridevi, who is regarded as the 'first female superstar' of Indian cinema, passed away last year, but even today her unforgettable charm lives on. On Sridevi's 56th birth anniversary today, her daughter Janhvi Kapoor, who has always idolised her mother, posted a beautiful birthday wish for the late actor.

"Happy Birthday Mumma. I love you," she wrote alongside a beautiful throwback picture of the actor, proving how badly she's missing her beloved mother today.

Happy birthday Mumma, I love you

Janhvi's post has since garnered 1,79,547 likes and nearly 2,300 comments. Priyanka Chopra, Manish Malhotra, Dia Mirza, and Masaba Gupta, among many others, sent love to the 'Dhadak' actor on her heartfelt post.

Sridevi was also remembered by Anil Kapoor's wife Sunita Kapoor, who celebrated her bond with the late actor, in a heart-warming post, "Memories are always special. Sometimes we laugh by remembering the times we cried, and we cry by remembering the days we laughed! That's life. Happy birthday Sri, Miss you so much."

Designer Manish Malhotra, one of Sridevi's closest friends, shared a stunning still of the legendary actor and wrote "Miss you" with heart emojis.

Last year, the film division, a subsidiary of the Ministry of Information and Broadcasting, organised a special screening of Sridevi's movies in order to celebrate her 55th birth anniversary. Sridevi passed away on February 24 in Dubai, where she went to attend a family wedding. The late actor would have turned 56 today.

Today is a bittersweet day as we celebrate you on what would have been your 56th Birthday…We feel the sadness of your loss deeply, but remembering your smile and the joy you brought to all our lives unites us in your memory...We miss you everyday #Sridevi! pic.twitter.com/O8XwPUQGy4

Happy Birthday Jaan, missing you every minute of my life , keep on guiding us , you will remain with us till eternity. #Sridevi pic.twitter.com/pGPhgbmcBN

Born as Shree Amma Yanger Ayyapan in 1963, she was known for her iconic roles in Hindi movies like 'Chandni', 'Lamhe', 'Mr. India', 'Chaalbaaz', 'Nagina', 'Sadma', and 'English Vinglish' among many more. The Padma Shri awardee had also made a mark with her extraordinary performances in Tamil, Telugu, Hindi, Malayalam and Kannada films. However, her last film was 'Mom' for which she also received Best Actress National Award, posthumously.

'Mom' was Sridevi's last film as a lead actor, while she had a brief cameo in 2018 film 'Zero', starring Shah Rukh Khan, Katrina Kaif and Anushka Sharma. Sridevi had already shot her scenes for 'Zero' before she passed away.