'The Sky Is Pink' is set to premiere at the 44th Toronto International Film Festival (TIFF). 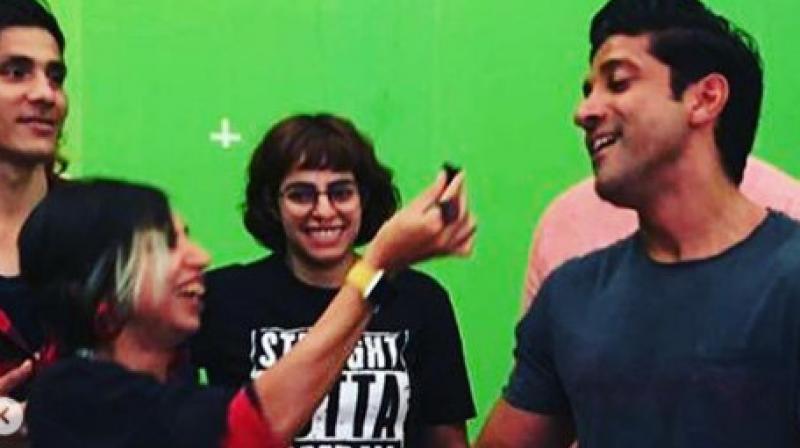 Director Shonali Bose with Farhan Akhtar on the sets of their film 'The Sky Is Pink'. (Image Courtesy: Instagram/ @shonalibose_)

In an exclusive interview, the director, whose first two films, "Amu" and "Margarita With a Straw", also screened in TIFF, spoke about the experience of working with two major Bollywood stars in a restrained, sensitive true story about the loss of a teenage child and the impact of the tragedy on her parents.

"It was initially a bit intimidating to work with Farhan and Priyanka," says Bose. "For one, Farhan is a director I personally admire. Moreover, he is someone who has directed Priyanka in a film. I felt conscious, but the two actors surrendered completely and trusted me. That made my job easy."

And it’s a Picture Wrap (All But Song) finally on this momentous journey of shooting The Sky is Pink. It’s been almost 9 months since we started shooting - with weddings and album releases for my actors in between. It’s very different than when you wrap a single schedule. So though I haven’t shot more days for this film from my previous ones it feels like a lifetime since I started because of the scattered schedule. No wonder I have post partum blues now. I literally have a baby at the end of the shoot gifted me by the Art Department! Our nakli baby for some scenes. He feels so real in my arms. Of course I’ve named him Ishlu. As he has been the magical light bathing this film. I feel blessed with the Producers, Cast and Crew I had on this journey. I miss everyone already. Thank god we still have a song to shoot. Now it’s a race for the Oct 11 release. #mybabyisborn #theskyispink #itsawrap @zairawasim_ @priyankachopra @faroutakhtar @rohitsaraf10 @roykapurfilms

"The Sky Is Pink" is about a 25-year relationship between a real-life couple, Aditi and Niren Chaudhary, whose 19-year-old daughter, Aisha, died of pulmonary fibrosis contracted as a result of chemotherapy done for Severe Combined Immune Deficiency (SCID).

Aisha, who wrote poetry and painted in the last five years of her life as life gradually ebbed out of her, saw the trailer of "Margarita With a Straw" 30 to 40 times.

"She said she hoped that she would live to see the film but she died before the film was released," Bose says.

Her parents saw the film. Six months later, they approached Bose to make a film about the life and death of their daughter seen from the viewpoint of the parents. The film's narration is done by Aisha, played by Zaira Wasim, who brings her perspective to the story in the form of a character spirit who lets the audience into her life.

"This narrative device came to us at the stage of the first draft itself," says Bose, who conducted a workshop to get Priyanka ready for the role of the mother. "She is a very hard-working actress and gave the role her all."

Thrilled to announce that The Sky is Pink will have it’s world premier at TIFF as one of 20 Gala presentations- the only Asian film this year in the Galas. The BEST most special and miraculous part is that this - the World premier - will take place on September 13, Ishan’s deathday. It’s a clear sign from him that he’s fully with his Mum and has blessed this film right from the start. In fact it was last year on his birthday that the making of the film started as on that day I woke up in LA to a message that PC loved the script and wanted to meet me. With Ishan and Aisha (Chaudhary) above and a fantastic cast and crew below - we turned the sky pink. 😃

The film, says Bose, was made possible by the fact that the parents of Aisha shared their story without any restraint. "Everything in the film is real. I did not make up anything," she adds.

The film's TIFF cut, Bose reveals, is slightly shorter than the version that is set to release commercially on October 11.

The film that will hit the theatres in India will have a longer version of a song composed by music director by Pritam with lyrics by Gulzar.

"The Sky Is Pink" has been produced by Ronnie Screwvala and Siddharth Roy Kapoor, both of whom will be present at the film's world premiere alongside Farhan, Priyanka and the director.

The producer of Bose's "Amu" released only three prints of the film. "I paid for two additional prints," recalls the director.

"Margarita With a Straw" had a 300-print release. "A thousand prints of 'The Sky Is Pink' will be in the theatres," reveals Bose.