Aamir Khan is intimidating as a person, has become family now: Zaira Wasim

The 16-year-old says that she was very close to him even before 'Dangal', but her equation has changed and obviously grow now. 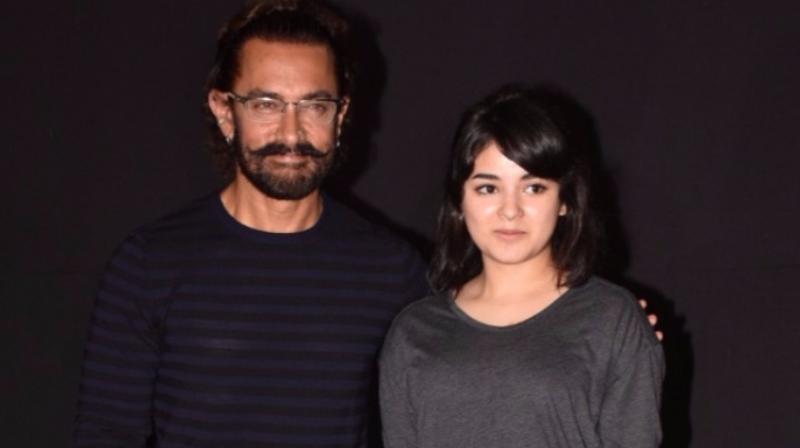 Aamir Khan is an actor and also a producer of Zaira Wasim starrer 'Secret Superstar.'

Mumbai:  She may have made her acting debut along side Aamir Khan in 'Dangal', but actor Zaira Wasim said she has not seen any of the films of the superstar.

In last year's 'Dangal', Zaira played the role of a young Geeta Phogat and earned a National Award for her performance.

The 16-year-old, however, says acting was something she never aimed for.

"I was never so inclined to this profession. It isn't like I wanted to be an actress. I am still the kind of a person who doesn't watch films.

"I cannot sit through a whole film. The last film I saw was 'Dangal'. In fact, I've not seen much AK (Aamir Khan) film's. I don't think I've seen any of it," Zaira told PTI.

In her second Bollywood outing 'Secret Superstar', Zaira has teamed up with Aamir again.

"The equation has changed and obviously grown. Even before 'Dangal', I was very close to him, all the girls were, now he has become (like a) family," she said about the 52-year-old actor.

"He is intimidating as a person. But it wasn't that I would die to work with him because I never wanted to be an actress. I never had something to be driven to (referring to acting as a profession). I am still exploring myself," she added.

Zaira said post her successful debut, things have not changed much for her and she still lives a normal life.

"People back home look at me exactly in the same way they used to a year back. Those are the people who helped me come this far. I can't throw tantrums in front of them. They are very proud of me for sure.

"Not much has changed, but there's so much love. Every time I am out, people come and click pictures, they talk to me, they want to know what's going on (referring to her upcoming projects), but apart from that life is the same."

Zaira said she is aware that she can't afford to take the success to her head.

"I know for a fact how important being humble is. There is no definition of success, it isn't that I've achieved everything. If I take this to my head, I could fall. I know that this could be a phase and there's a lot I need to see."

Written and directed by Advait Chandan, 'Secret Superstar' chronicles the story of a teenage girl who aspires to be a singer. The film is scheduled to release on October 19.