Housefull 4: Akshay, Riteish, Bobby chill in London, make this celeb gush over them

The members of the popular comedy franchise are enjoying the shoot in United Kingdom with a special guest. 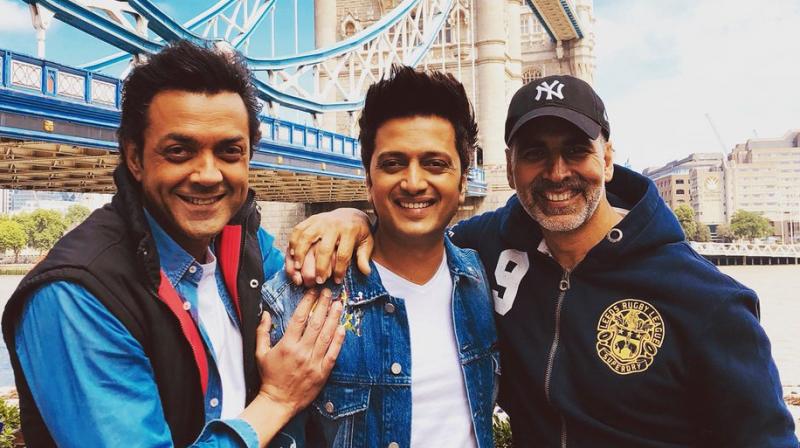 London: Akshay Kumar, Bobby Deol and Riteish Deshmukh are having a gala time in London where they are shooting for ‘Housefull 4.’

The trio posed for a picture together at the London Bridge and Riteish shared it on Twitter, calling his co-stars ‘partners in crime.’

With my partners in crime - @akshaykumar & @thedeol #LondonDiaries #HouseFull4 pic.twitter.com/wvZkvqUlPt

Moreover, Bollywood filmmaker and director of the film, Sajid Khan’s sister, Farah Khan is choreographing a new song for the upcoming comedy. She took to Twitter to announce it.

The shooting of the film has commenced on July 9.

On a related note, 'Heropanti' star Kriti Sanon will be making her debut in a comic role.

Kriti Kharbanda of 'Veerey Ki Wedding' fame and Pooja Hegde will also be seen in this movie.

The film is the fourth installment of the 'Housefull' series and is based on the theme of reincarnation.

The film will be released in 2D, conventional 3D and IMAX 3D on 25 October 2019 coinciding with Diwali.