During a recent press meet in New Delhi, Akshay Kumar did a funny thing which would surprise you. 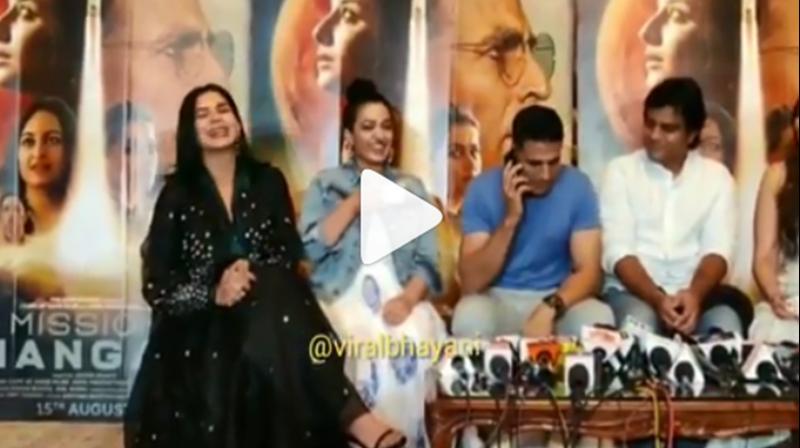 Mumbai: Akshay Kumar and his Mission Mangal team are having a fun time promoting the film at various place in the country. However, during a recent press meet in New Delhi, Akshay Kumar did a funny thing which would surprise you.

During the interaction in which Akshay Kumar was sitting along with Kriti Kulhari, Nithya Menen, Sonakshi Sinha, Taapsee Pannu and director Jagan Shakti. Amidst Q and A session, the Khiladi Kumar took the liberty and answered a phone call on behalf of a reporter whose phone kept ringing while the press meet was in loud mode.

Lot of us use our phones to record interviews but this particular reporter forgot to silent her phone. Guess what happens #AkshayKumar picks up the call and answers back 😎😄😄😄 #viralbhayani @viralbhayani

Meanwhile, Mission Mangal is based on the story of scientists at Indian Space Research Organisation who contributed to the Mars Orbiter Mission, which marked India's first interplanetary expedition. The film also stars Sharman Joshi and Mohammed Zeeshan Ayyub in pivotal roles. Mission Mangal is set to release on August 15 on the occasion of Independence Day.