J P Dutta is currently shooting for his ambitious next, 'Paltan' featuring Sonu Sood, Arjun Rampal, Harshvardhan Rane and others. 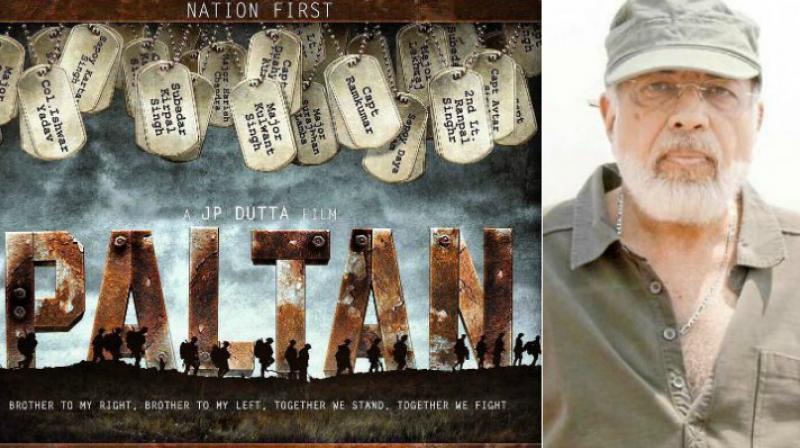 While Border went on to achieve several milestones and was even screened to commemorate India’s 70th Independence Day, the director- producer is now hoping to push the envelope and present audiences with another chapter from Indian history – Paltan, based on the Indo-China war of 1962.

The veteran filmmaker was invited by Chief of the Army Staff, India, Lt. General Bipin Rawat, for celebration in Delhi today to commemorate the Army Day. January 15 is observed every year as Army Day in India. Army Day is dedicated to the soldiers who fought to safeguard the country's honour.

J P Dutta informs, “The armed forces have lived because of their defining work. What they have done for their country cannot be put into words. Protecting a country like India, which is not a conqueror, but a liberator, a democracy where every religion is accommodated, is not easy. If there was no armed force, no Army, there would be no India. Making movies for those who take bullets in their chest for us, is the least we can do."

Paying his tribute to the army men on his social networking site, Luv Sinha says, “I’d like to wish our heroes in the armed forces and the nation on #Indianarmyday2018. I had the opportunity to experience what a real soldier must face, and am grateful for and respect how much they sacrifice for our nation. Jai Hind. @ZeeStudios_ #Paltan #indianarmy #ArmyDay”

For those that stand strong so that we may wake up free tomorrow, we will always be grateful for all that you sacrifice. Jai Hind. @ZeeStudios_ #ArmyDay #IndianArmyDay #message #Paltan pic.twitter.com/y8bYu7eKcb

Gurmeet Choudhary Wrote,"On this special day I feel closer to the Indian army than ever before #wethepaltan #paltan #ArmyDay2018 @ZeeStudios."

Currently working on his next, Paltan, also based on the Indian Army, Dutta recently completed a month-long shooting schedule in Ladakh. While two songs were also canned, the unit will now begin filming the soldiers' back stories in Chandigarh. I have returned to direction after a gap, and working on this film is a dream come true. I have completed 95 per cent of the movie.

Talking about Paltan, which focuses on the personal relationships around the lives of men in uniform, the veteran filmmaker adds, “The emotions we are dealing with here are more complex and varied. It’s about the relationship the soldiers leave behind and how it affects the families. Border dealt with the soldiers’ love interests, but Paltan will also showcase their siblings and parents. It will also display the soldiers’ brotherhood, as they save each other when at war.”

Sujay Kutty, Business Head of Films – Zee Studios adds, “Paltan is a very special film for us and we are proud to be associated with the project that salutes the army men. It’s a fitting tribute to the Indian Army.”

Produced by JP Films and directed by Dutta, the film is scheduled for a summer 2018 release.