Entertainment   Bollywood  15 Jun 2018  Boney’s children from his two marriages to move in together
Entertainment, Bollywood

Boney’s children from his two marriages to move in together

The source also reveals the family’s plan to come together under one roof. 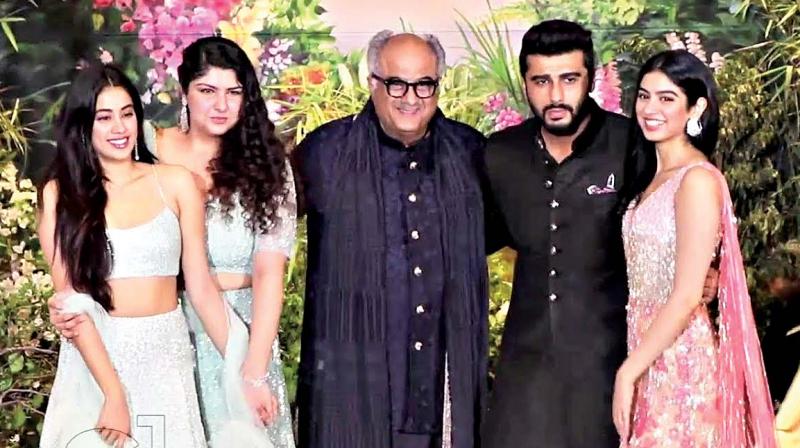 Arjun wants his father, Boney and his two stepsisters, Janhvi and Khushi to shift to his current residence where he stays with Anshula.

The bond between Boney Kapoor and his deceased wife, Sridevi’s allegedly estranged family has grown stronger in recent months.

Unknown to many, Sridevi’s sister, along with daughter Maheshwari, visited Boney’s parental home last month to spend quality time with the bereaved family.

Says a source close to the Kapoor family, “Some time ago, Boney’s mother played host to Sridevi’s family. Srideviji’s sister, Srilatha, and her daughter, Maheshwari, flew down from Chennai to Mumbai to spend time with Boney, his mother, and Boney’s daughters, Janhvi and Khushi from Sridevi, and his children, Arjun and Anshula, from his first marriage. They are all together now.”

Explaining why Srilatha chose to hold her peace after Sridevi’s demise, the source says, “There was never any discord between Boney and Sridevi’s family. The only reason Sridevi’s sister, Srilatha, was not visible after Sridevi’s death is because she avoided the media, as she didn’t know how to answer awkward questions. Otherwise, Srilatha is very much around to lend support to Boney, Janhvi, and Khushi.”

The source also reveals the family’s plan to come together under one roof. “In fact, Arjun and Anshula will soon be moving in with Janhvi and Khushi into one house. The only problem is, which house? Arjun wants his father, Boney and his two stepsisters, Janhvi and Khushi to shift to his current residence where he stays with Anshula. But Boney’s mother wants the entire family to be united under one roof, the roof of Boney’s parental home,” says the source.

When contacted, Boney was in London and sounded calmer than he has been since Sridevi’s death. “I am here in London with my three daughters, Anshula, Janhvi, and Khushi. My son, Arjun, was here too. But he has gone back to Mumbai now. Yes, we’re all together as a family. This gives me some comfort,” said Boney.