Bollywood experienced a brilliant first half of this year with numerous successes, and two biggies yet to release. 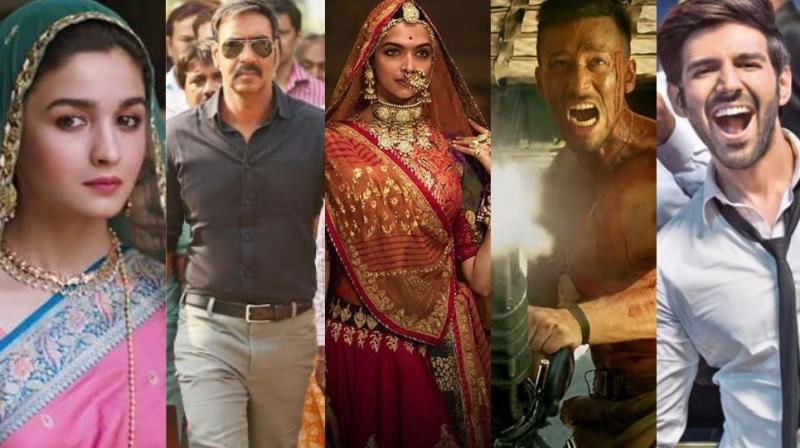 Mumbai: Two big films, ‘Race 3’ and ‘Sanju’, are yet to hit the screens, but things are looking bright for Bollywood this year with the industry delivering several hits in the first half.

Success of Deepika Padukone-starrer ‘Padmaavat’, Alia Bhatt's ‘Raazi’ and ‘Veere Di Wedding’ has proved that female-led dramas are commercially viable and have a huge audience base.

According to experts, the industry has done better than last year.

“The first half has been outstanding as compared to 2017. This year, both big and small budget films have done well. There has been a rise in footfalls and growth, and the credit goes to superior quality of content.

“Audience is getting smarter. They make a choice today about whether they want to have a theatrical experience for a film or want to watch it at home or on the phone. So the filmmakers have to up their game and provide content that not only appeals to them but also proves to be a visual treat,’ Akshay Rathi, a city-based exhibitor, told PTI.

Film critic and cine historian Rajiv Vijayakar said the second half of the year looks promising as some major titles are lined up for release.

“The first half of the year has been a year of great performances and content in form of 'Padmaavat', 'Parmanu', 'Hichki', 'Sonu...' and 'Baaghi 2'. With the release of 'Race 3' and 'Sanju', the first half already looks very bright. The second half has some really promising films to come,’ he told PTI.

Films across multiple genres have done well at the box office and the top grossers also include ‘Parmanu’, ‘Padman’ and ‘Raid’.

The first blockbuster hit of this year was Sanjay Leela Bhansali's ‘Padmaavat’ featuring Padukone in the title role. The film, also starring Ranveer Singh and Shahid Kapoor in the lead, released on January 25 amid a lot of controversy. It raked in over Rs 580 crore worldwide.

"I feel blessed to be associated with a film that has created history in so many ways. For me, the box office collections are only an indication of how much love the film has received. The response has been beyond overwhelming and I am grateful to Sanjay Sir yet again for entrusting me with Padmavati," Deepika said in a statement to PTI.

‘Sonu Ke Titu Ki Sweety’, featuring Kartik Aaryan in the lead, turned out to be a dark horse at the box office. The small budget romantic comedy collected about Rs 148 crore.

Ajay Devgn starrer ‘Raid’ was another hit and made a little over Rs 140 crore.

"Each of our last four films, 'Hindi Medium', 'Tumhari Sulu', 'Sonu Ke...' and 'Raid' came from a very different genre, but have all done exceptionally well at the box office. We believe that a good entertaining film will always find its audience and reach its potential,” Bhushan Kumar of T-Series told PTI.

Tiger Shroff starrer ‘Baaghi 2’, which was produced by Sajid Nadiadwala, opened with Rs 25 crore and went on to earn Rs 250 crore worldwide.

“The key to a commercially successful film would be the one that is all inclusive and meant for a larger base of audience. Whatever bracket of genre we put these films in, one thing that is common is that they entertain a large section of our diverse society,” Nadiadwala said.

Rathi predicts a positive outlook for the remaining year with the release of ‘Race 3’, ‘Sanju’, Aamir Khan's ‘Thugs of Hindostan’ and Shah Rukh Khan's ‘Zero’.

‘'Sui Dhaaga', 'Dhadak' and 'Simmba' (also) look promising. 'Thugs...' will do a phenomenal business given the fact that it has Aamir and Amitabh Bachchan in it,’ Rathi said.