Though India did not qualify for the final, the craze for cricket does not die down. 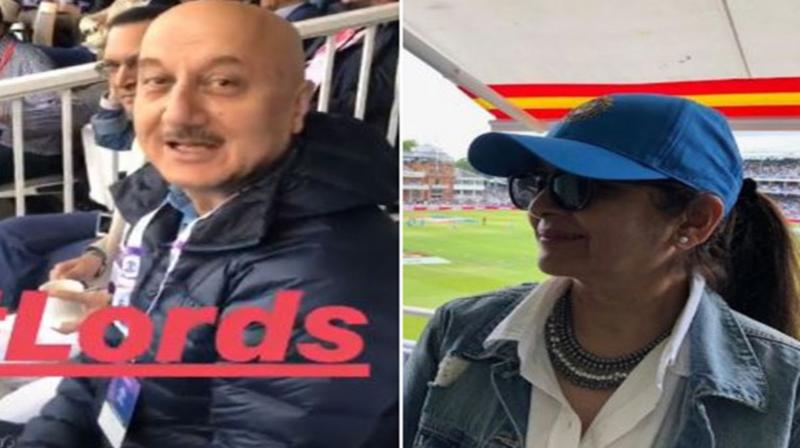 New Delhi: Though India did not qualify for the final, the craze for cricket does not die down. Among many cricket fans, there were also a few B-Town celebs who reached Lord's ground to see the ICC Men's Cricket World Cup final between England and New Zealand.

First in the list is actor Neena Gupta, who recently wrapped up shooting of her part in upcoming sports film 'Panga' and enjoyed the match with an Indian team cap on her head. The actor looked sleek and smart in her simple pieces of denim and white shirt. She kept her hair open and accessorized her ensemble with a neckpiece.

Anupam Kher, who recently joined as a new member of The Academy of Motion Picture Arts and Sciences, also witnessed the historic match at Lord's cricket ground. He was invited by his age-old friend Rajat Sharma.

The ICC Men's Cricket World Cup final witnessed a first-ever super-over in which England came out triumphant as they had scored more boundaries in the match to lift their maiden 50-over World Cup on Sunday at Lord's Cricket Ground.

The winner could not be decided as both the normal 50 overs and super-over action ended up in a tie.

In the super over, England scored 15 runs and they were able to restrict New Zealand to 15 runs, and they won the match as they had scored more boundaries in the match.

In the 50-over spell, both England and New Zealand registered scores of 241.

Earlier, New Zealand was able to stun India in the semi-final as they defended a mediocre total of 240 runs. The Kiwi bowling lineup destroyed the Indian top-order as they dismissed Virat Kohli, Rohit Sharma, and KL Rahul for just five runs on the board.

MS Dhoni and Ravindra Jadeja tried their best to go away with a victory, but as soon as the duo got dismissed, New Zealand was able to snatch an 18-run victory. Dhoni played a knock of 50 whereas Jadeja scored 77.

In the other semi-final, England defeated Australia by eight wickets to make it to the final for the first time since 1992.