Entertainment   Bollywood  16 Feb 2017  I feel fortunate to be working with great actors like Shahid and Saif: Kangana
Entertainment, Bollywood

I feel fortunate to be working with great actors like Shahid and Saif: Kangana

Kangana feels that Shahid and Saif are very special, very natural and spontaneous. 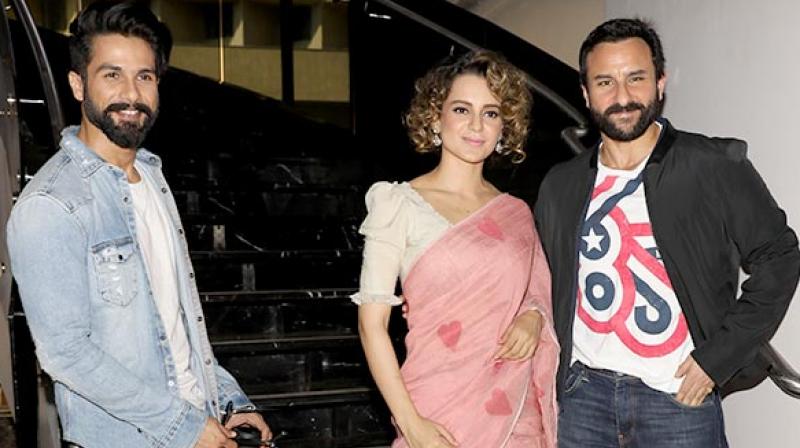 Shahid, Kangana and Saif are currently on a promotion spree for 'Rangoon'.

Mumbai: Bollywood actor Kangana Ranaut has said that her ‘Rangoon’ co-stars Shahid Kapoor and Saif Ali Khan are incredible actors and she is fortunate to share screen space with them.

‘Rangoon’, a love story set against the backdrop of World War II, brings together the three actors on-screen for the first time.

“They are incredible actors. They are amazing with Vishal Bhardwaj sir (director) and he has given them wonderful characters in the films that he did with them. They are very special, very natural and spontaneous. I feel fortunate to be working with great actors like them. I liked Saif as Langda Tyagi in Omkara and Shahid was incredible in Haider. They (Bhardwaj and Saif and Vishal and Shahid) have great tuning and they had the same energy on this film (Rangoon),” Kangana said.

Praising Bhardwaj, the 29-year-old actress said that the filmmaker has the courage to deal with subjects which no one will ever think of bringing on-screen.

“He has that undying desire to push the envelope and go beyond what people expect from him,” she added.

In the movie, the 'Queen' star portrays the life and times of Mary Ann Evans aka Fearless Nadia, Bollywood’s first original stunt-woman still remembered for her fiery role in the movie ‘Hunterwali’.

“She (Fearless Nadia) is a stunt woman and it’s an amalgamation of many characters in the film. I am known to speak my mind and to say things that I stand for is right. That sort of conviction and identity was important for the role,” she added.