Rebel with a cause

The feisty Kangana Ranaut speaks about shattering the glass ceiling in Bollywood and being unapologetic about demanding her talent’s worth. 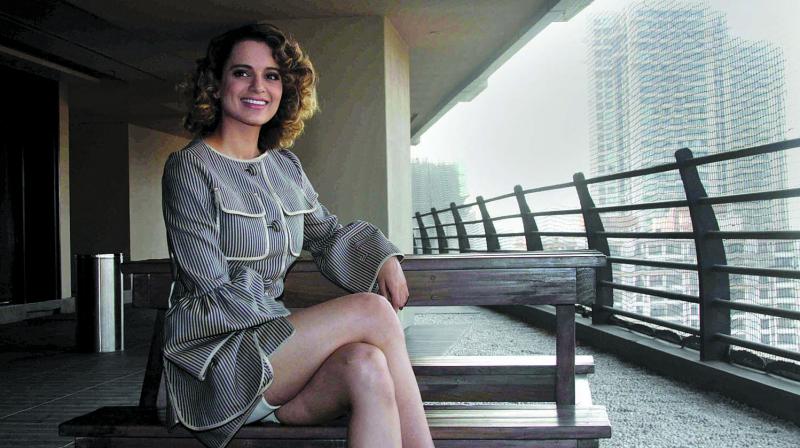 Kangana Ranaut is a rebel child and it’s a badge she wears with much pride. As a young girl who came to the big city from the hills in North India, Kangana had no godfather to back her dreams. Today, she is referred to as the queen bee of the industry (thanks to her smashing hit movie Queen) and doesn’t bat an eyelid before calling out Bollywood’s fondness for the silver spoon. In a recent interview with Karan Johar, for instance, the actress called the filmmaker the flag bearer of nepotism. Ahead of the release of her next big film Rangoon, in which she plays the protagonist (flanked by two leading male actors), Kangana admits that the feeling is empowering. Which is why, she doesn’t think twice before asking for a fair share — rather, an equal share. “Undeniably, the unequal distribution of remuneration happens even in Hollywood. I have fought for not being paid as much as the male fraternity. When I can carry films solely on my shoulders, then why can’t I be paid well? I have been criticised for talking about this by the fraternity folks too but I have always stood by what I say. I have also dropped many a film for which I was to be underpaid,” she says unapologetically. “We need to quit just talking and bring about some concrete changes; I believe in taking action. Films are the right medium to promote women empowerment,” she explains.

In fact, the actress has plans that stretch beyond just acting in movies — she plans on co-producing her films much like the Khans of the industry and Akshay Kumar. Explaining her interest, she explains, “Co-producing a movie will give me a share in profit and also the benefit of royalties every seven years. It will be a sort of pension amount.” She plans on opening her own production house soon though.

Despite the high wave that she’s riding today, Kangana hasn’t forgotten the ups and downs that life has thrown at her. “I don’t allow my successes or failures to deter me. There are times when I’ve felt shivers run down my spine, but I have learned to move beyond the negative,” she asserts.

Kangana confesses that she has some expectations from Rangoon. Set against the backdrop of World War 2, the film is a love triangle of one girl and two boys caught amidst the war. Having won the National Award for Queen, she hopes to bag the Padmashree Award for Rangoon. “It felt great to receive the National Award from the President, but my parents were happier and prouder. They even preserved the list of itinerary, invitation cards, and the ribbon!” Recalling her visit back home, she says, “When I reached my hometown, they had decorated not only the National Award, but also all those little things that they received at the function. It makes me proud as a daughter to have given this happiness to my parents, especially since I was a rebellious kid,” she adds.

When asked if the film has any connection with the yesteryear hit Mere Piya Gaye Rangoon, the Queen star points out the difference. “I play an actor in Rangoon and the story opens with this number. However, my character is singing and dancing to this song with a difference — the film features Mere Piya Gaye London, instead of Rangoon.”

Kangana has been fighting off controversies from the time she stepped into the industry. Apart from her very public spat with Hrithik, the actress also was made news recently for her alleged tiff with sister and manager Rangoli. Reacting to the same the actress said, “It’s a real shame that such news has gotten out. My sister can’t accompany me abroad because she just got hitched. There is no sibling rivalry at all; we bond well.” As for plans of getting hitched herself she says, “Of course I want to settle down and have a family and kids. Every girl’s dream is to get married and have a loving family. This will happen in my life too, but it has to happen in it’s own time. But when? That’s the million dollar question.”