The average voter no longer believes in the things that an actor, no matter how influential, is seen doing on screen. 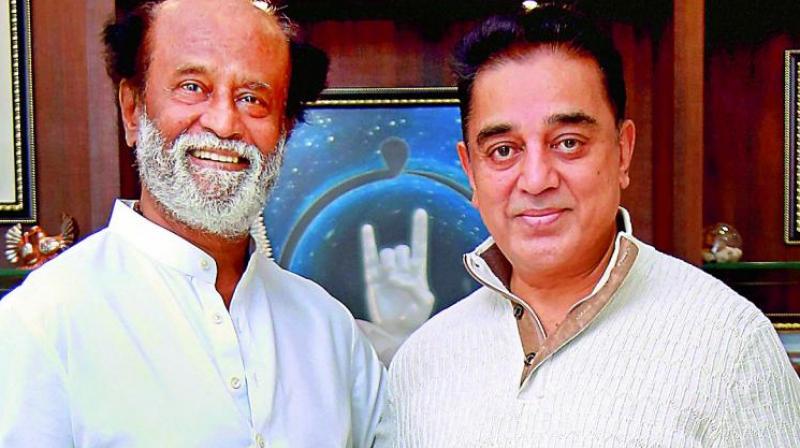 What does superstar Rajinikanth intend to achieve in the realm of Tamil Nadu politics? Well, other than making it clear that he wants to practice ‘spiritual politics’ (a term that has left everyone stumped), of course.

There is no clear-cut policy in sight, nor a name for his future political party. Is the 67-year-old still meditating on the possibility of becoming a politico?

While the nation awaits his spiritual awakening, a source close to Rajinikanth says that he is currently in the process of concreting his plans.

“He has gone on his annual pilgrimage for 15 days, which political observers are linking to his political plans. But that is not the case! Rajini undertakes a tirth yatra every year. And it’s no different this year. He may be giving the impression that he will make big announcements about his political plans when he returns from the pilgrimage when in reality there is no plan yet,” says the source.

Partners in politics
However, the one thing that can be expected from Rajini’s politics, if and when he actually announces his party, is his younger daughter Soundarya’s active participation. “Soundarya will be Rajini’s right-hand person. She will be the go-to person for all political queries regarding Rajinikanth. She will handle the day-to-day political activities and liaison work, almost like Indira to Jawaharlal Nehru,” says the source.

Moreover, the possibility of a coalition with Kamal Haasan is also “very strong”. Says a source close to Haasan, “Kamal’s chosen colour for politics is not saffron. Rajini seems unsure of what his colour is. But he has based his politics on M.G. Ramachandran, so Rajini will continue to act in films, though not as frequently.”

In an interview, Soundarya had said, “My dad never made any career plans. He is a very simple human being. He never forgot where he came from. As his children, my sister Aishwarya and I learnt this from him. With our dad, there are no two faces. What you see is what he is. Whether it’s a fan or a producer, he treats them all the same. He has been down to earth all his life. He will never change.”

But change is the only constant in politics. Whether Rajini will practice the politics of cinema or use politics as an extension of celluloid image, he may not achieve the same success as M.G.R. The demographics of the Tamil vote bank has changed. The average voter no longer believes in the things that an actor, no matter how influential, is seen doing on screen. He has to start from scratch and prove his worth in the political arena.