Raveena shot an advertisement for a sanitizer brand in Mumbai on Tuesday, while completely adhering to safety precautions 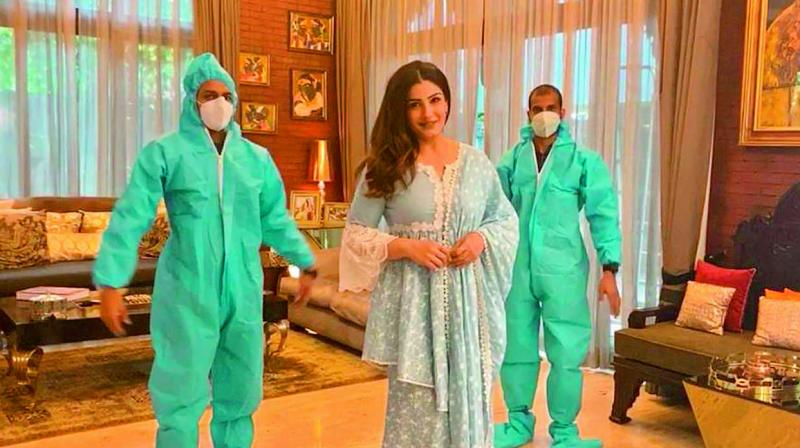 With Covid-19 spreading during shoots, Bollywood stars are now very cautious about their work.

But rather than staying away from shooting, Raveena Tandon has found a way out. She opened the gates of her sprawling bungalow to let in a shooting crew to film a commercial.

Raveena shot an advertisement for a sanitizer brand in Mumbai on Tuesday, while completely adhering to safety precautions.

This is the first time she’s going on the ‘set’ since lockdown was first announced. Quite active on social media, the star has time and again urged fans to make staying safe and keeping healthy their top priority in these trying times.

Contrary to the erstwhile practice of stars being accompanied by an entourage, including  a driver, spot boy, manager, hair dresser, make-up person and personal trainer — to all shoots, Raveena worked without her team during Tuesday’s shoot. There were just two crew members present from the production side and they wore PPE kits.

“The working scenario has changed, but as we say, change is the only constant. With the new normal and limited crew members, it took us a lot less time to call it a day. Only two members were allowed in the house, one being the cameraman and the other the sound recordist. They were both wearing PPE kits and all their equipment was disinfected before they entered the house. I followed the social distancing norms with the crew members,” she said, adding, “I feel, after this shoot, I am ready for the new normal.”

The Mast Mast actress will be next seen in Prashanth Neel’s KGF: Chapter 2 alongside Yash and Sanjay Dutt.