Batla House vs Mission Mangal: Find out who is opening day winner, Akshay or John

Both the movies performed remarkably well on the first day of their release. 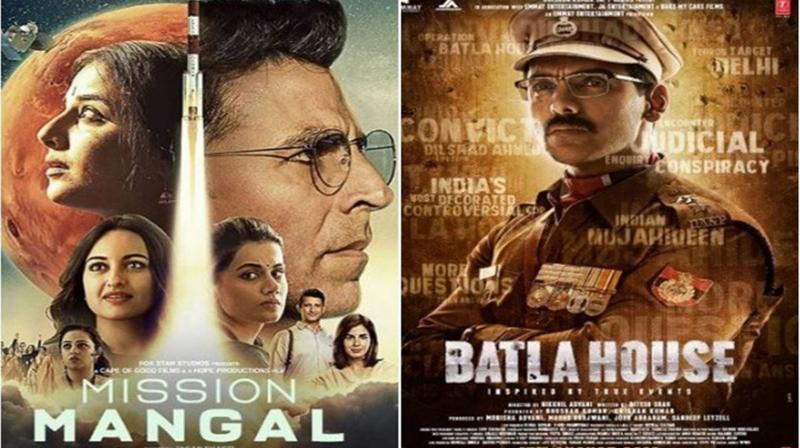 New Delhi: Seems like Independence Day proved to be a great day for two big Bollywood films: Akshay Kumar's 'Mission Mangal' and John Abraham-starrer 'Batla House'! Both the movies performed remarkably well on the first day of their release.

'Mission Mangal' managed to surpass the first-day collections of 'Batla House' by minting Rs. 29.16 crore at the domestic box office. The latter collected Rs. 14.59 crore at the ticket counters. Indian film critic and trade analyst Taran Adarsh shared the box office collection of both the films on his Twitter handle.

Taran noted that 'Mission Mangal' witnessed a fantabulous start at the box office and Independence Day holiday gave the film an additional boost. He also shared that the space drama has emerged as Akshay's biggest opener till date.

In a separate tweet, Taran shared the box office figures of 'Batla House'. He noted that the film fared well on Day 1, although the numbers were affected due to the clash.

Rakesh Dhawan (Akshay) and Tara Shinde (Vidya) lead a team of scientists who overcome their personal challenges and failures to serve as the brains behind one of the greatest missions in history: The launch of India's first satellite to Mars.

The movie, based on a true story of India's mission to Mars, is about ordinary people achieving the extraordinary. Directed by Jagan Shakti, the film is co-produced by 'PadMan' director R Balki.

Meanwhile, John-starrer thriller drama is inspired by the real Batla House encounter that took place almost a decade ago on September 19, 2008, officially known as Operation Batla House. The 'Romeo Akbar Walter' actor is portraying the role of Sanjeev Kumar Yadav, who spearheaded the encounter.