All may not be well with the Kapoor clan

Anil Kapoor and Sanjay Kapoor were conspicuous by their absence at Boney Kapoor’s birthday party. 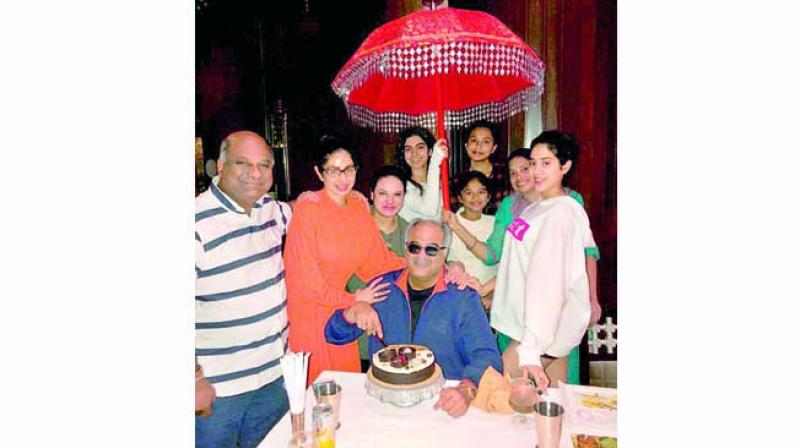 For Boney’s 63rd birthday, friends were flown in from Mumbai to Chennai for the party that Sridevi threw.

Boney Kapoor had a whale of a time at his recent birthday party. But the party lacked some familiar faces — his brothers and their families. It makes one wonder if Boney has fallen out with his brothers Anil and Sanjay Kapoor. Of late, Boney has not been seen at any of the Kapoor family functions. Recently, he was missing from the Diwali parties at the homes of both Anil and Sanjay, while Arjun Kapoor (his son from his first wife) was present at both the get-togethers.

For Boney’s 63rd birthday, friends were flown in from Mumbai to Chennai for the party that Sridevi threw. But the Kapoor family members were not in attendance.

A family friend says, “Boney’s relations with both his brothers have been deteriorating. Ever since Boney’s first wife Mona, who was loved by the entire Kapoor family, passed away, the strain in the relationship between Boney and his brothers has deepened. These days, Boney doesn’t visit Anil or Sanjay and they don’t visit him, even for family functions. As for Boney’s son Arjun and daughter Anshula, they’ve made it very clear that they do not want to be associated with Boney’s second family.”

This leaves Boney and Sridevi with her family for support. At Boney’s birthday bash, Sridevi’s sister Srilatha was present with her husband and daughter. Ironically, it was Boney who got Sridevi to patch up with her sister. Today, he stands isolated from his own brothers whose lives and careers he nurtured.