Sanjay Dutt was accompanied by his film ‘Bhoomi’s’ producer Sandeep Singh for the hearing. 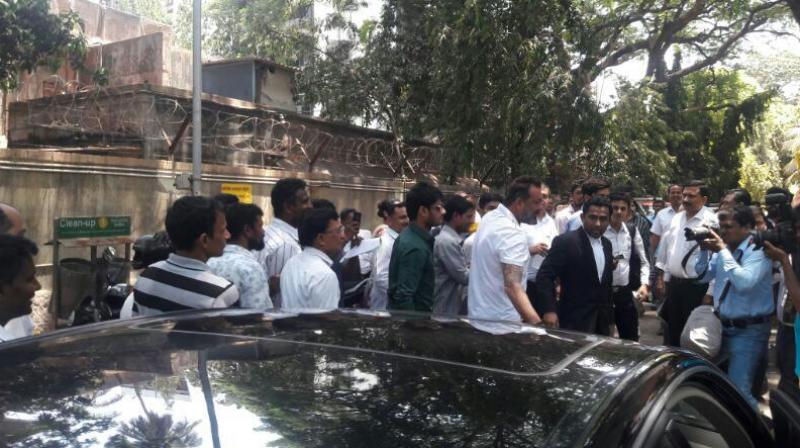 Sanjay Dutt exits from the Andheri Court today after his hearing on the Noorani case.

Mumbai: A bailable warrant had been issued to actor Sanjay Dutt yesterday for his non-appearance before the court in a matter pertaining to alleged threats to filmmaker Shakeel Noorani.

The actor appeared before Andheri court today, where the bailable warrant issued against him got cancelled; which came as a huge sigh of relief to him.

He was accompanied by his comeback film ‘Bhoomi’s’ producer Sandeep Singh for the hearing.

Sanjay was present in the court for exact eleven minutes and then made a safe exit from the court.

What is the entire case?

Advocate Gupta, Noorani’s lawyer quoted ANI as saying, “The case is that my client was producing a film in 2009 named ‘Jaan Ki Baazi’ wherein Sanjay Dutt was cast for lead role and a huge amount was also paid to him, but he didn’t come for the shooting, therefore, the film could not be completed… Noorani thereafter filed a complaint before producer’s associations. The association directed Dutt to play a certain amount to Noorani, since Dutt did not pay such amount. So Noorani filed a petition before High Court.”

The lawyer told ANI that after the High Court attached Dutt’s properties in the case; Noorani allegedly received threatening calls from the underworld.

Speaking about the arrest warrant that they issued against Sanjay yesterday, he said, “Since for so many days Sanjay Dutt was not appearing before the court, therefore we made an application for the issuance of the warrant. And considering continuous absence in the court, today the court was pleased to issue an arrest warrant against Dutt.”