Nothing is well between Imtiaz Ali, Ekta Kapoor over 'Laila Majnu'?

Directed by Imtiaz's brother Sajid Ali, 'Laila Majnu' is a love story of a Hindu-Muslim couple set in Kashmir. 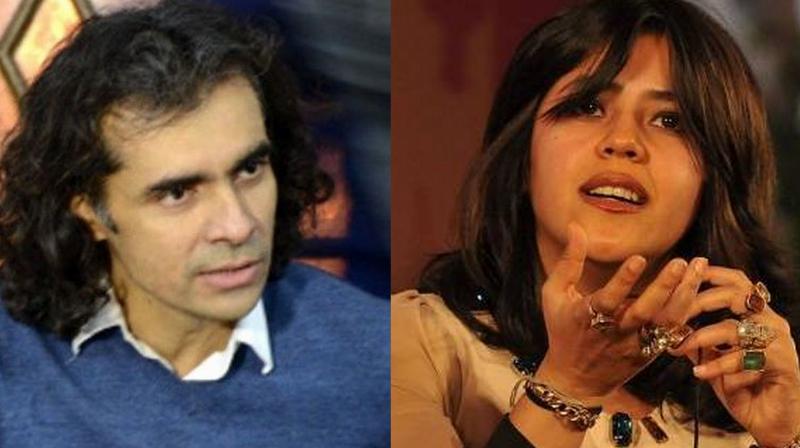 Mumbai: Producer Ekta Kapoor is recreating the epic love story of ‘Laila Majnu’ in a film and she is joined by filmmaker Imtiaz Ali who is presenting the film. Directed by Sajid Ali, 'Laila Majnu' is a love story of a Hindu-Muslim couple set in Kashmir.

However, according to Mid-Day report, the makers are having creative differences over promotional strategy to release their film. A source close to the project revealed to the daily, "Ekta and Imtiaz have been meeting frequently to brainstorm about the best possible way to promote the love saga. Their sensibilities are as different as chalk and cheese. Ekta feels they should opt for a marketing blitzkrieg while Imtiaz wants low-key promotions."

"Since it's a modern-day retelling of Laila and Majnu, Imtiaz feels the love saga should grow on people instead of being promoted heavily. But, Ekta is keen on going all out with the publicity, especially since the movie has newcomers in the lead," the source added.

However, the source points out that taskmaster Ekta is satisfied with director Sajid's work. "In the past, she had asked Milan Luthria to re-shoot the climax of Once Upon A Time In Mumbaai (2010), among others. But this time, she is happy with the way Laila Majnu has shaped up," the source mentioned.

Earlier this year, Ekta took to Twitter to share a photograph of herself along with Ali. She tweeted, “Excited to recreate the epic love story, #LailaMajnu with master storyteller Imtiaz Ali. @balajimotionpic #ImtiazAlisLailaMajnu #LailaMajnuOn4thMay"

Ekta’s home production banner had also unveiled the poster and release date of the film. The tweet read: “Some love stories never die... They get retold by passionate storytellers. Presenting the teaser poster of Ekta Kapoor and Imtiaz Ali’s ‘Laila Majnu’. Releasing on May 4.”

Some love stories never die...they get retold by passionate storytellers. Presenting the teaser poster of @ektaravikapoor and #ImtiazAlisLailaMajnu. Releasing on 4th May. pic.twitter.com/SXN6wjuDty

Well, we just hope Imtiaz and Ekta sort out their differences and release the film soon.