The makers of the series are not rattled by the voices of dissent, either political or those aimed at the coarse language. 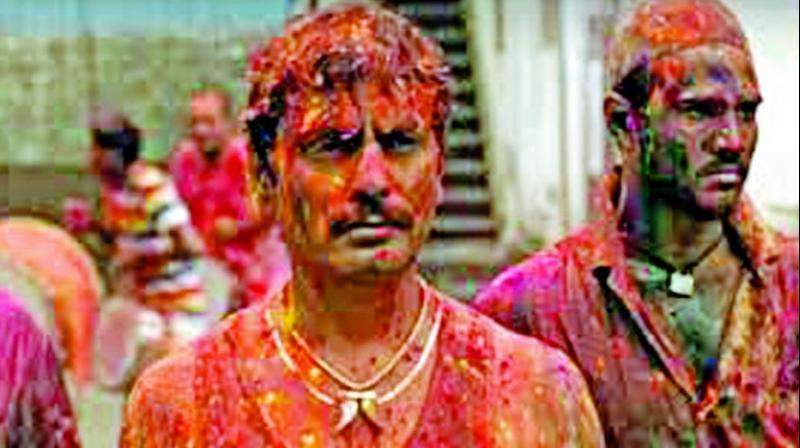 Sacred Games, the first Indian series on Netflix, is making ripples. In fact, more like waves, at least in political circles. The series about a fictional gang warlord, RAW and corrupt cops as opposed to at least two honest policemen is an altogether new experience. Rated +16 and containing nudity, sex and profanity at the drop of a hat, the series brings something new to users of the online content provider.

A theme underscored in the milieu in which it is set is total disdain for politicians. Unflattering references to former Prime Ministers have raised the hackles of some Congress men who are trying to move the police or courts to contain the uncensored content. The crux of the problem is in a reference to former PM Rajiv Gandhi as ‘fattu’ getting translated in subtitles to a more offensive ‘p***y’.

Barbs are aimed, in passing, on Indira Gandhi too as the director Anurag Kashyap takes broad swipes at politicians and Indian society, which seems to have gone down well with the audiences. The slighting of the Gandhis seems to revive the debate on freedom of cinema and speech. But the Congress is in a cleft stick here as it had earlier defended Padmaavat against those who sought to throttle cinematic freedoms. Tweeple are asking why isn’t Congress defending the precious freedom of speech in this series. However, one thing is clear — the audiences are lapping up the freedom of expression in an Indian series on an international channel even if the idiom is somewhat jarring in the profanities used. The makers of the series are not rattled by the voices of dissent, either political or those aimed at the coarse language.

Mohan Sinha @Mohansinha
My liberal friends have suddenly fallen quiet ever since Congress leaders moved the HC to have a Sacred Games episode pulled down for making fun of Rajiv Gandhi. No one's talking of fascism, Hitler, Modi etc. anymore. BOLTI BAND.

Sonam Mahajan @AsYouNotWish
Congress files complaint against Nawazuddin Siddiqui for insulting Rajiv Gandhi in “Sacred Games,” a Netflix series. The same show mocked Bhagwan Ram in the most blasphemous manner, had any Hindu group lodged an FIR, the whole Bollywood brigade would have returned awards by now.

nikhil wagle@waglenikhil
If Congress activists are targeting @SacredGames_TV for criticising Rajiv Gandhi, it is a test for @RahulGandhi. Perfect opportunity for him to defend freedom of expression

Geetika Swami @SwamiGeetika
So this what congress is scared of??Sacred games on Netfix talks about how Rajiv Gandhi handled Shah Bano’s Triple Talaq case.If this is just someone's figment of imagination,why Congress tries to stifle the Freedom of Expression.Hindu-Muslim Vote bank?
@RahulGandhi #RajivGandhi

Abhishek Mishra @Abhishek_Mshra
Strongly condemn the “Fattu” language which was used for Former PM Rajiv Gandhi in #SacredGames and its totally unacceptable. But why Mahadev ke Bhakt and Januedhari Brahman Rahul Ji not raised the issue of insulting Hindus, Hindus God and Brahmins in same show ?

J@insaneiyat
The Shah Bano citation is strong with this one. I’ll have to read the book if there’s more to this. This is the last thing @INCIndia would want to see considering the TG of Netflix. #SacredGames @varungrover @anuragkashyap72 @FuhSePhantom

Dushyant K. Mahant@DKMahant
After renaming all the airports, stadiums, hospitals, etc etc after Rajiv Gandhi, a SHOW will discredit the former PM?Man, @INCIndia is REALLY scared of Sacred Games it seems. Why?

Davie Virdi @DavieVirdi
Pathetic! Freedom of expression my friend is key and too many politicians are just waiting in the wings to be insulted in order to get some airtime

Pankaj Saraf @saraf_pankaj
Not just this, this thought process lives in the people. Who lost the war of thought by killing Gandhi. Today they are in power, and trying to paint facts with falsehood. Abki baar.... Data Manipulation Sarkar

Rajdeep Sardesai @sardesairajdeep
Don’t the high courts of the country have something better to do than review Sacred Games? And what happened to freedom of creative expression?

OneWayHighway @SantyTalk
What happened to Freedom of expression?? #FOE is selective