Video: Bachchans cheer for Aaradhya as she showcases her cute dance moves at school function

On Saturday, Aaradhya was the star attraction at a group performance during her school's annual day function. 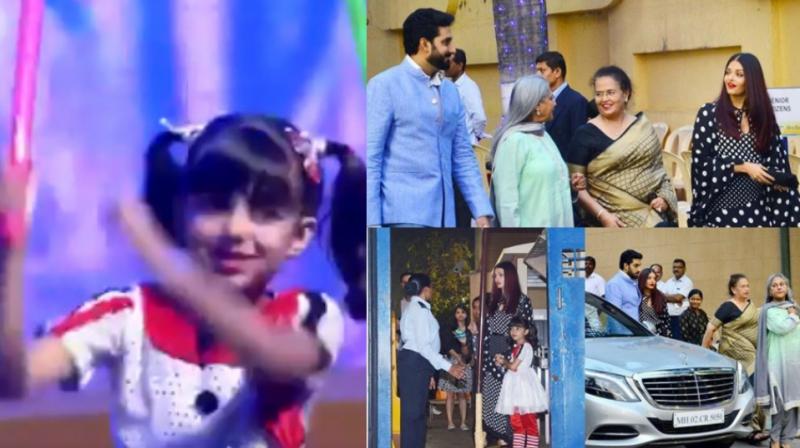 Screngrabs from the pictures and video at Aaradhya's school annual day function.

Mumbai: The debate on nepotism might never calm down, but the talent on offer from industry kids can't be ignored.

Genes made headlines when Suhana Khan’s brilliant acting prowess was on display in a school play, the video of which had gone viral earlier this year.

And it seems the performance genes have also been passed on to another star kid, Aishwarya Rai Bachchan and Abhishek Bachchan’s daughter Aaradhya.

On Saturday, Aaradhya was the star attraction at a group performance during  her school's annual day function.

The little girl looked extremely confident as she lead her co-performers and pulls off her cute dance moves, notably the one flapping her ‘wings', with ease.

She is also seen as the only one accompanying the teenage performers at the end of the act, before running off in a jiffy.

Aaradhya’s Annual Day performance from a few minutes ago. She was clearly in charge and I especially love the ending pic.twitter.com/yxNK1YR1Sw

Aaradhya’s surely got the moves! At her Annual Day Function a few minutes ago pic.twitter.com/9Q7wlDKXHB

Her parents Aishwarya and Abhishek seemed extremely proud of her, cheering on from the crowd.

Abhishek and Aishwarya siting in the audience during Aaradhya’s Annual Day function pic.twitter.com/SUR3LjtUDX

Her grandfather, Amitabh Bachchan, however, was absent as he is shooting for 'Thugs of Hindostan' in Thailan, but did give a shoutout by raving about the ‘sell out’ crowd and sharing pictures on Instagram.

Aaradhya’s annual day stage performance time ... and its a sell out with the family in attendance.. except Dada ji .. who is in Thailand for TOH shoot

Mukesh Ambani, who is seen along with Abhishek and Sachin Tendulkar's wife Dr Anjali Tendulkar in one of the pictures, owns the school, which is definitely a star kid-studded one.

Shah Rukh Khan’s son AbRam and Hrithik Roshan’s sons Hrehaan and Hridhaan also study in the school, with the two stars also being spotted arriving for the annual day function.