The Supreme Court agreed to hear a plea of the producers, while security arrangements prevented untoward incidents during protest. 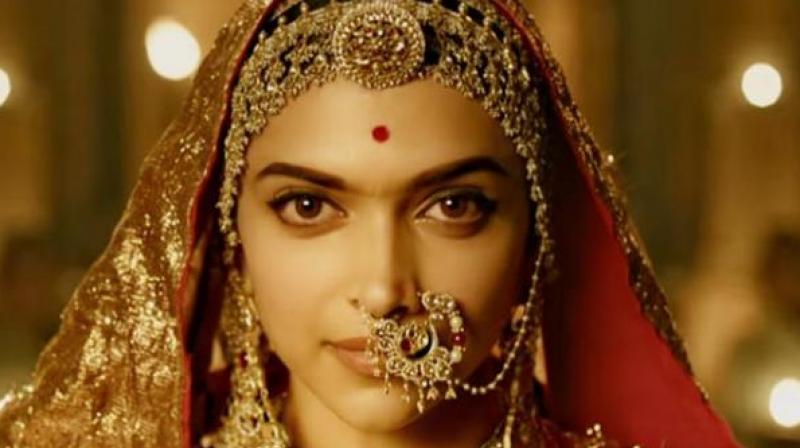 Deepika Padukone plays the character of Rani Padmini in 'Padmaavat.'

New Delhi: The Supreme Court on Wednesday agreed to hear on Thursday a plea of the producers of the controversial Deepika Padukone-starrer movie 'Padmaavat' opposing the ban imposed on its screening by various state governments.

A bench comprising Chief Justice Dipak Misra and Justices A M Khanwilkar and D Y Chandrachud considered the submission of the counsel of Viacom 18 and other producers of the film that the plea be heard urgently as the movie was set for all-India release on January 25.

Governments of Haryana, Gujarat, Himachal Pradesh, Madhya Pradesh, Rajasthan and Uttarakhand have declared that they will not allow screening of the movie, which also stars Shahid Kapoor and Ranveer Singh in lead roles.

The producers moved the top court through senior lawyer Harish Salve and advocate Mahesh Agarwal and submitted, in a petition, that the movie has undergone changes, including in its title, as suggested by the Central Board of Film Certification (CBFC).

Asserting that the film has been cleared by the CBFC, the plea said the states cannot impose a blanket ban on a film, and its screening can be suspended in a particular area or areas on account of law and order problem, not across the states.

Earlier on two occasions, the apex court had thwarted attempts to stall the release of the film, saying it cannot pre-judge a movie before the authorised body CBFC takes a decision.

The top court had, on November 28, expressed unhappiness over remarks made by politicians over the movie and asked them to desist from reacting as they could prejudice censor board's decision.

"When a matter is pending for consideration before the Central Board of Film Certification (CBFC), how can persons in public authority comment on whether the CBFC should issue a certificate or not? It will prejudice the decision of CBFC," the bench had then said.

Politicians of all hues, including some chief ministers, recently made public statements on the film, with many of them being against it.

The film is based on the saga of the historic battle of 13th century between Maharaja Ratan Singh and his army of Mewar and Sultan Alauddin Khilji of Delhi.

The set of the movie was vandalised twice, in Jaipur and Kolhapur, while its director Sanjay Leela Bhansali was roughed up by members of Karni Sena earlier last year.

The Rajputs, along with other community members, staged a sit-in protest near Rithola crossing on the Udaipur-Ahmedabad highway by blocking it for nearly half-an-hour, police said.

Traffic had to be diverted due to long snarls of vehicles on the highway, they said.

However, no untoward incident was reported due to the security steps taken by the police administration as a precautionary measure to deal with the protesters, the police said.

The highway resumed to normal after protesters discussed their future course of action on the 'Padmaavat' release issue, they said.

In a social media post, patron of Shree Rajput Karni Sena chief Lokendra Singh Kalvi gave a call to gather in masses on January 21 in Samrau in Jodhpur to show the solidarity of the community.

The film got stuck in a controversy after various Rajput groups alleged that it distorted history, a claim repeatedly denied by Bhansali.

Decision on banning the movie by Rajasthan, Gujarat, Madhya Pradesh, Himachal Pradesh and Haryana governments has failed to pacify the anger of certain communities, including the Rajputs.

Featuring Deepika Padukone as Rani Padmavati, Shahid Kapoor as Maharawal Ratan Singh and Ranveer Singh as Alauddin Khilji, the film was given a U/A certificate from the Central Board of Film Certification (CBFC) recently.

Last month, during the certification process of the film, Bhansali appeared before a parliamentary panel where he said that the film is an adaptation of Sufi poet Malik Muhammad Jayasi's 'Padmavat'.

The film, slated to be released on January 25, was given the go-ahead by the CBFC, which asked the makers to change the title from 'Padmavati' to 'Padmaavat' and suggested some other modifications.