The Hitesh Kewalya directorial sees the 35-year-old romancing Jitendra Kumar, with whom he also has a much-hyped kissing scene. 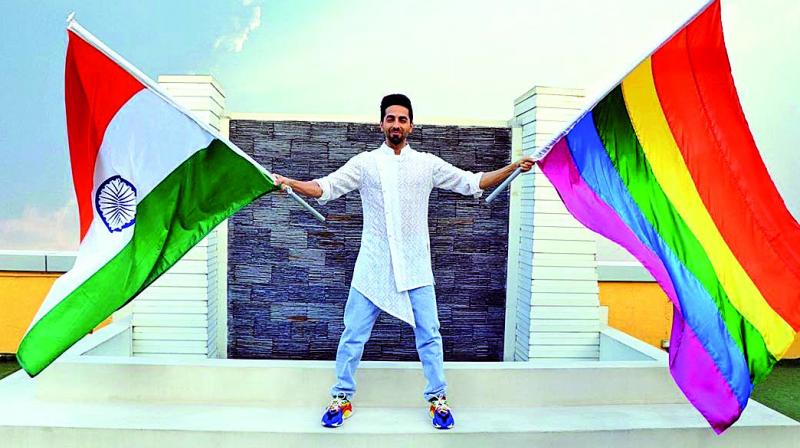 Ayushmann Khurrana has been quite the advocate for social change ever since his first film Vicky Donor in 2012. His unconventional roles in quirky films like Badhai Ho! and Dream Girl have started conversations about traditionally taboo topics, much like what he aspires to do with his upcoming film Shubh Mangal Zyada Saavdhan and homosexuality.

“It’s the first time ever a film on homosexuality is being made in the commercial space. I am really excited about this film. It’s a family entertainment film so everyone can come and watch it. They should be more open to homosexuality,” says the actor.

The Hitesh Kewalya directorial sees the 35-year-old romancing Jitendra Kumar, with whom he also has a much-hyped kissing scene. The Andhadhun actor clarifies that it is not a lengthy scene. “We have a kissing scene, which took us about two to three takes to be okayed. It’s not a very prolonged kissing scene, though,” he reveals, adding that there are no intimate scenes in the film. “We will be seen holding hands as well in a scene. We have no bed scenes, it’s a family film. But if the script may demand it or if we were doing another similar film, and if the demand of the script is for me to be in a swimsuit, I will have to do it. However, there is no such thing in this film.”

Speaking about accepting the LGBTQ+ community, Khurrana believes that the nation is ready to do so. “Even before the Supreme Court struck decriminalised consensual gay sex, I was shooting in Mumbai for my film Dream Girl and I saw two guys kissing in a parking lot. It is then I felt that we are more open as a society and our country is prepared for this kind of love. But still, there are some conservative families that exist, and they feel it is a kind of sickness and unnatural. After watching this film, they will realise that if two people wish to love their way, then what’s the hitch? Everybody has the right to live with their own orientation,” he asserts.

However, the actor also finds that Bollywood is more accepting of the LGBTQ+ community than other corporate professions. “I feel they (LGBTQ+ people) are found in every field. But there is an acceptance in our (film) industry because it’s an artist’s world, They always accept and look for talent from different sexual orientations, races, religions, and nationalities; anyone from anywhere is accepted as long as they are talented. But in the corporate world, they are still little tightlipped about it. So there is a difference,” he explains.

Switching gears to his career, Khurrana avers that films about obscure topics happen to come his way. “I give credit to the script. Either I am the right choice, or maybe I look out for things that are different. I always keep my eyes and ears open. It’s not just about getting in touch with A-lister writers or directors, I think a good script can come from anyone and everyone. There is no rule that only A-lister actors had to do that role; anybody who is talented and has something different to offer can play the role,” he says.

As for the future, the Bala actor reveals that he is reading three different scripts for biopics. “I am reading biopic on a sportsperson, an industrialist, and also a lawyer. Nothing has been finalised yet. I am reading (scripts), but is not like a biopic interests me — it is the script which has to have certain entertaining value addition. I will play a biopic only if the script allures me. I was not keen on being the hero based on the script for Shubh Mangal Savdhan. Only after reading the script did I agree to do that film. Similarly, I would love to play a sportsperson or a lawyer, but only if its script is interesting entertaining and commercial as well,”  concludes the actor.