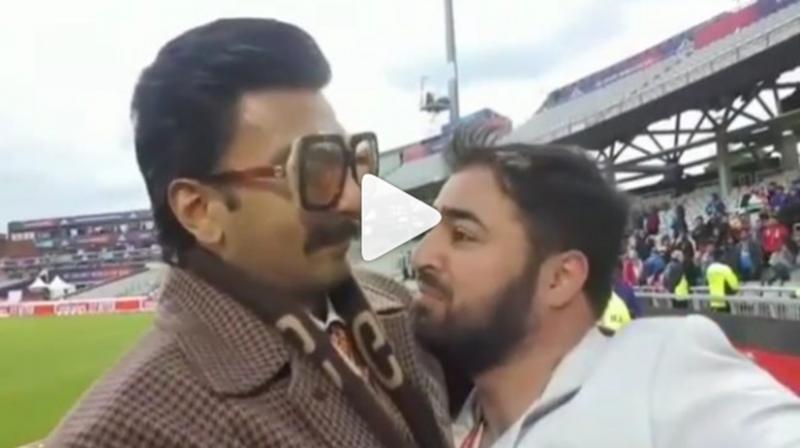 Mumbai: Ranveer Singh is undoubtedly one of the finest actors in Bollywood. But apart from that, he's the man with the golden heart as well.

On Sunday, Ranveer watched India vs Pakistan live World Cup match at the Old Trafford Cricket ground in Manchester, England. The 'Gully Boy' actor was seen cheering for Team India with full spirit. He also danced in the commentary box.

India beat Pakistan by 89 runs and fans have celebrating team India's victory over arch-rival. However, Pakistan fans felt disheartened by the players' performance. Amidst all, Ranveer in the stadium consoled one disheartened fan post the match as the video went viral on the social media.

#ranveersingh with a Pakistani fan. He is so sweet 👍❤

In the video, a disheartened Pakistani fan can be seen crying. But big-hearted Ranveer hugs him and consoles him. He says, "Don't be disheartened. You played well. The boys are committed, dedicated, professional, and they'll be back." Eventually, the fan thanked Ranveer for his heartfelt gesture.

Meanwhile, Ranveer also shared many pictures on his Instagram handle with many cricket stars. Take a look:

Arguably the most destructive batsman the world has ever seen! 🏏💥 VIRU PAAJI DA JAVAAB NAHI! 🌟@virendersehwag

Ive been a die-hard fan of Indian cricket since childhood. Invested so much emotion into our beloved team. Willing and wanting them to be the undisputed best in the world. And then, there was VIRAT KOHLI. Ive witnessed a brash boy evolve into the very embodiment of class. Displaying a rare brand of ferocity and passionate expression, he changed the face of Indian cricket forever. He’s well on his way to being hailed as the greatest of all time. Leading our country like a true alpha warrior. Yeh naya India hai, aur yeh banda naye India ka Hero hai. We are proud of you, Kaptaan. 🇮🇳 @virat.kohli

On the work front, Ranveer is currently shooting for Kabir Khan's directorial venture, '83 in London. The film also stars Deepika Padukone, Pankaj Tripathi and others. '83 is scheduled to be released on April 10, 2020.