The movie is all set to release on January 10 and is being produced by Ajay with Bhushan Kumar and Krishan Kumar. 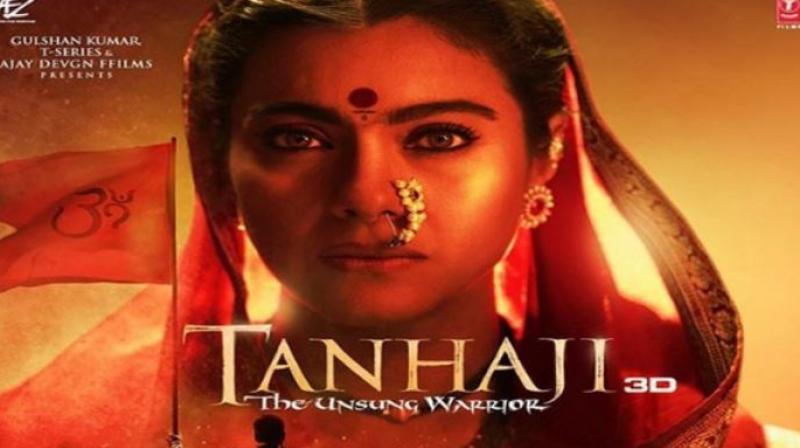 Mumbai: Actor Kajol will be next seen doing a film opposite Ajay Devgn in ‘Tanhaji: The Unsung Warrior’. A day before the launch of the much-awaited trailer Ajay revealed the first look of his reel and real wife Kajol who stars as Savitribai Malusare in the upcoming feature, period drama film.

The new poster shows Kajol all decked up as a fierce Marathi woman. Donning a red saree she has put up a traditional nose pin and has completed her look with ethnic jewellery. Her dark red circular bindi on her forehead is powerful. The poster introduces Kajol’s character but also shows a man holding the flag of Maratha’s on his knees.

The period drama also features Saif Ali Khan. Talking about Ajay’s role he will be playing the role of ‘Taanaji Malusare’ and Saif will be playing the role of ‘Uday Bhan’- a Rajput who was working for Mughal king Aurangzeb. ‘Taanaji’ was the untold warrior of Indian History who fought with Chatrapathi Shivaji Maharaj. Post ‘Omakra’ in 2006 the duo will be seen on the silver screen after 12 years.

The movie is all set to release on January 10 and is being produced by Ajay with Bhushan Kumar and Krishan Kumar.