Ram Kamal Mukherjee has penned the biography of Hema Malini called Hema Malini: Beyond The Dreamgirl. 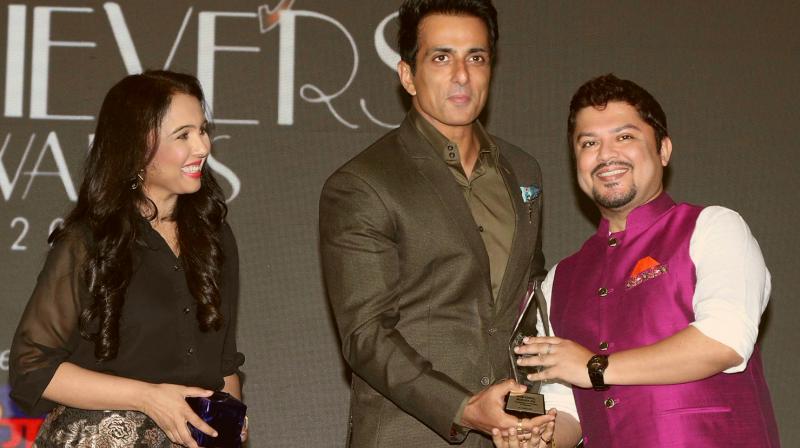 Mumbai: Author and television producer Ram Kamal Mukherjee was honoured with Society Achievers Award for his biography Hema Malini: Beyond The Dreamgirl in Mumbai.

Bollywood actor Sonu Sood and Suchitra Krishnamurthy conferred him an award for his outstanding contribution to Indian cinema and literature. "I am extremely happy to present this prestigious award to Ram Kamal who has been a prolific writer since last two decades of film journalism," said Sonu Sood.

Ram Kamal had launched the book in October at the star-studded event. Published by Harper Collins India, it was launched by Deepika Padukone in Mumbai, Rituparna Sengupta in Kolkata and Celina Jaitly in Dubai. The book has been a part of leading literature festivals in India and abroad, including Times Lit Fest, The Hindu Lit For Life fest and Sharjah Book Fest.

Ram Kamal completed 20 years in the field of journalism this year and calls the moment the most precious of his life. "I started my career in Mumbai with Nari Hira's Stardust. I am honoured and privileged that after almost two decades I received this award from my mentor Mr Hira, my colleague Suchitra Iyer (editor of Society) and Ashok Dhamankar," says Ram Kamal.

"I dedicate my award to my parents, wife and Hemaji. Without their support and good wishes this wouldn't have been possible," added Ram Kamal.

Bollywood's eternal dreamgirl Hema Malini congratulated Ram Kamal on this achievement saying, "He worked sincerely on this book for almost two years. I guess when someone works with honesty, he is blessed by God."