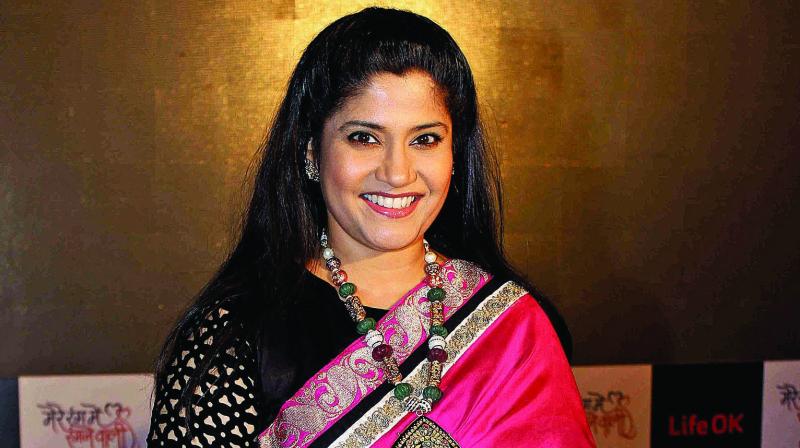 Renuka Shahane, who brightened up homes with her dazzling smile co-hosting the cultural magazine TV show Surabhi from 1990 with Siddhart Kak, was set to grow even more famous in 1994 after being cast as Madhuri Dixit’s elder sister in the blockbuster Hum Aapke Hain Kaun. Apparently, the film brought her so many followers, when she got married to Ashutosh Rana over nineteen years ago, her posters were exhibited all over to his hometown, gesturing an open arm welcome to their real ‘bhabhi’ (older sister-in-law).

Today, the TV presenter and actress from a multitude of series on TV and films who turned director, is currently directing a film starring Kajol, called Tribhanga — Tedhi Medhi Crazy, set to release on Netflix on 15 January. Speaking to us exclusively, Renuka shares her experiences on directing the film.

“Ajay decided to produce the film after he’d read the script and liked it. But even as the producer, he never came on the sets as he decided to let his wife Kajol enjoy the process,” says Renuka.

Setting out into direction

For Renuka, however, moving to direction was not a walk in the park. Always keen on turning a director, Renuka began her journey as an assistant director to Dr Vijaya Mehta with the television series called Lifeline for Doordarshan, in which she also acted. “I was the fourth assistant in charge of costume,” she tells us. “And despite acting in it too, my basic interest was to be Dr Vijaya’s assistant and learn the ropes of direction. And I really learnt the process of filmmaking since then and went through various stages of directing since.”

While she’d hoped to understand the nuances of filmmaking better by learning it in the Film and Television Institute of India (FTII), fate had other plans. “I’d already become a professional actor and was quite busy. So that dream to turn a director took a back seat though it always lingered around,” shares Renuka. “Later, when my husband Ashutosh reminded me of my dream, I began working on my mother’s novel, Rita Welinkar.” After pitching the screenplay of Rita Welinkar to several producers, as had her mother too, Renuka finally found her producers in Manmohan Shetty’s daughters, Arti and Pooja Shetty. Thus began her journey as a director. Her first directorial, the Marathi film Rita, released in 2009. “I decided that I’d direct a film once every two years,” Renuka says.

But the journey to Tribhanga — Tedhi Medhi Crazy was pretty close to what the title states — long, arduous and a little crazy. “After I started writing Tribhanga it took me three years to transform it into a proper script. Then, when I nearly found a producer to take it on in the NFDC production market, the whole thing fell apart in 2018, which meant I was back at the starting line, pitching the story to production houses,” recollects Renuka.

After six years, however, she found a producer in Siddharth P Malhotra who actually liked the script. “Siddharth was the one who suggested that I read it to Kajol for the role of Anu. Kajol loved the script and Anu’s character and she came on board. Everything else fell into place very beautifully thereafter,” adds Renuka.

The actress and director is all praises for her protagonist. “Kajol is a fabulous and phenomenal actor and in Tribhanga, too, she’s done a wonderful job. I’ve always loved her as an actor, so when she accepted the role, it was like a dream-come-true for me, and I had to pinch myself a thousand times to remember I was not dreaming,” she says with a chuckle.

Tribhanga also stars other well-reputed names such as Tanvi Azmi, Mithila Palkar and Kunal Roy Kapur. Did Renuka feel nervous about having all of them on her turf? “Well, I had prepared well before embarking onto the sets, so I wasn’t nervous at all, and the talented cast was rather obedient —there were no hiccups,” explains Renuka. “For instance, Kajol only works with people she has established trust with. That bond we created before embarking onto the floors and she completely trusted me once we went on the floors. And I’ve known Tanvi from my time in Lifeline.” As we end the chat, Renuka gives us a tiny peek into the film. “In Tribhanga, we celebrate women as perfect ideals that don’t exist. While every human is flawed by nature, society prefers to call those — especially married women and mothers who don’t fit into their patterns — as flawed. We call them flawed because they are intelligent and strong enough to know their flaws and accept it without taking it on their chin. It’s the decision they have made that is the space I am representing my women in,” she says in conclusion.