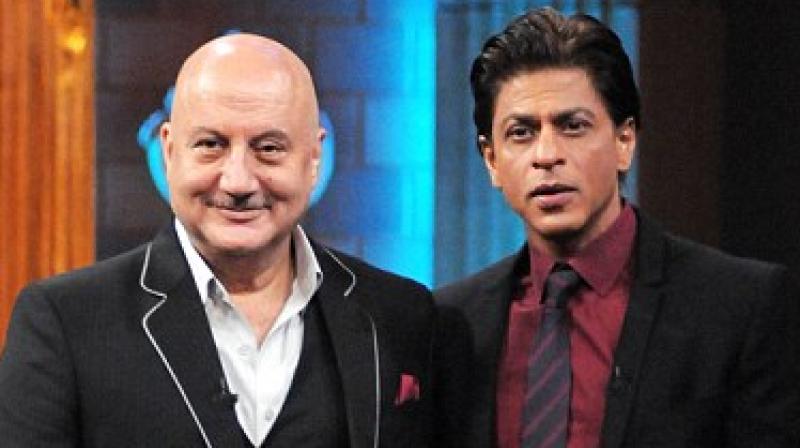 Mumbai: Dil Wale Dulhania Le Jayenge' (DDLJ) is hands-down everyone's favourite romantic film. Shah Rukh Khan as Raj and Kajol as Simran will forever be etched in our hearts! But one cannot forget Anupam Kher as SRK's cool father in the film and how the two gave us the coolest on-screen father-son duo of Bollywood!

The duo shared an unconventional and adorable father-son relationship in the film, which was a refreshing break from the strict father we were used to seeing in Bollywood films.

Anupam revived 'DDLJ' memories and reminded SRK of old times with a post on his Twitter handle.

The veteran actor tweeted all the way from New York, "Mere pyaare, Shah Rukh! Baas aise hi... New York mein tumhari achanak yaad ayi. We have had some great times together. And then we all grew up! Love and prayers always."

Anupam's post gave us major DDLJ nostalgia as he attached a hilarious gif of the two doing their signature high-five and hugging.

SRK quickly responded to Anupam's post with the sweetest message possible. The 53-year-old actor sent the veteran actor an invitation to play a match of snake and ladders and said that they are still young at heart. He also added a miss you at the end of his adorable message.

"Arre nahi Daddy Cool! 'Grow up' hon aapke dushman. Hum dono ka dil to baccha hai ji. Come back home let's start with snakes and ladders and we can move to making sand castles in the air. Miss you."

Arre nahi Daddy Cool! ‘Grow up’ hon aapke dushman. Hum dono ka dil to baccha hai ji. Come back home let’s start with snakes and ladders and we can move to making sand castles in the air. Miss you. https://t.co/asgWd1N5Cb

Anupam replied to him in Hindi, saying, "See you soon. Much love."

'DDLJ', directed by Aditya Chopra, released on October 19, 1995. It won several awards and received an overwhelming response from audience and critics alike. It also became the longest-running film in the history of Indian cinema.

The duo went on to co-star in many films together like 'Kuch Kuch Hota Hai', 'Paheli', 'Jab Tak Hai Jaan', 'Veer Zaara' and 'Happy New Year'.

Meanwhile, Anupam is in New York shooting for his TV series 'New Amsterdam', while SRK is in China to attend the 9th Beijing International Film Festival, and promote his film Zero.

The 53-year-old actor got a warm welcome in China and thanked his fans via a Twitter post earlier.

Anupam was last seen in 'The Accidental Prime Minister' while SRK last starred in 'Zero'.