Setting couple goals yet again, Priyanka and Nick, stole the show on the Cannes red carpet. 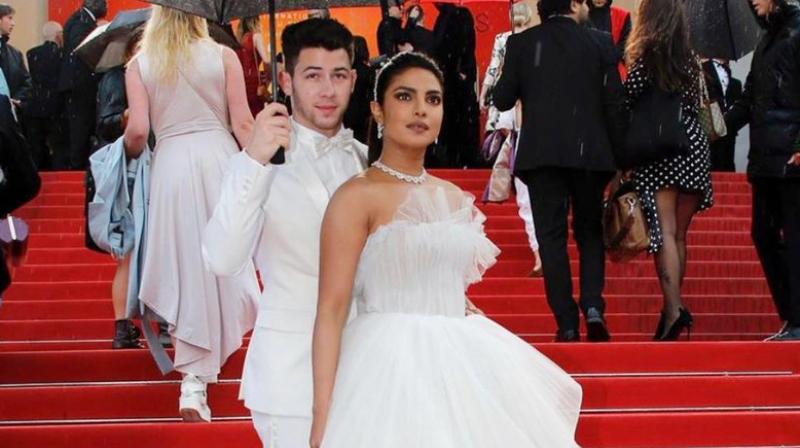 Wearing a gorgeous Georges Hobeika number, PeeCee looked like a dream when she ascended the famous Cannes steps with Nick in tow. Braving a light drizzle, the couple attended the screening of French drama film 'Les Plus Belles Annees D'Une Vie'.

Minimalistic make-up and beautiful Chopard diamonds completed Priyanka's look on her third day at the French Riviera. White tufts of gossamer coupled with a neat hairdo drove home the point that nobody owns fashion like Priyanka does!

What really made us go "aww" though, was when Nick, like a true gentleman straight out of a Jane Austen novel, held the umbrella up as the two went up the famed steps.

Looking dapper in all white, Nick opted for a classic tux with a bow tie and black shoes.

The two have been grabbing eyeballs at Cannes this year, with Priyanka leaving the crowd wanting for more in a black, shimmery Roberto Cavalli gown on her first red carpet appearance at the iconic festival.

Before that, she redefined power dressing when she stepped out in an all-white pleated Honayda jumpsuit with a striking cape, paired with a micro bag from Akris.

She later opted for a lavender Fendi dress for the Chopard party, while Nick looked sharp in a black suit.

While Deepika returned home to Ranveer Singh after giving us a few of the most iconic fashion moments, Diana Penty sashayed into "Day 2 at Cannes" in an Amit Aggarwal saree for the FICCI Forum at the India Pavilion.

She had earlier attended the Chopard party in a fringed golden Celia Kritharioti Couture mini creation, paired with bejewelled boots from the same designer.