The celebs praised India for their great performance and also congratulated Pakistan for winning the finals. 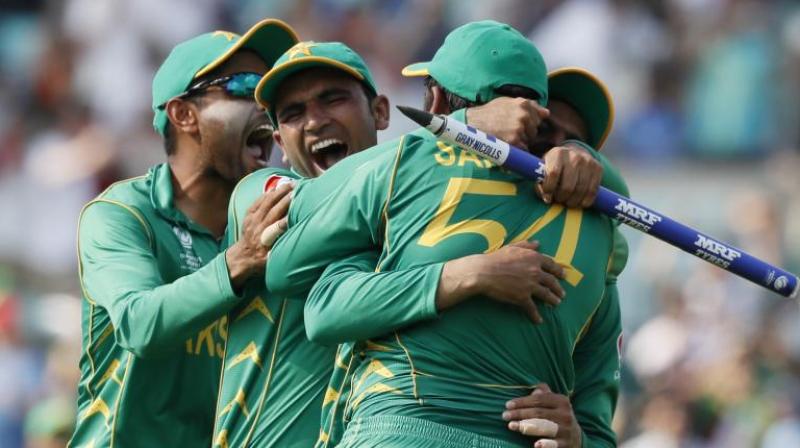 Pakistan team after their victory on Sunday. (Photo: AP)

New Delhi:  Bollywood celebs like Ranveer Singh, Riteish Deshmukh, Suniel Shetty and many others have backed the Indian Cricket Team after they lost the final of the 2017 ICC Champions Trophy against Pakistan.

Pakistan came out with a splendid all-round performance and defeated India by 180 runs at The Oval to lift their maiden Champions Trophy title in Sunday's clash.

The celebs praised Team India for their great performance in the tournament and also congratulated Team Pakistan for winning the finals.

Ranveer Singh praised the Indian team for their performance during the whole tournament and wrote, "Win some, lose some..still the greatest team in the world! Solid throughout a hard-fought tournament...proud of you boys! #INDVPAK."

'Bank Chor' star Riteish Deshmukh also expressed his thoughts on the games and also congratulated Pakistan on their victory, as he tweeted, "Hard Luck Team INDIA ????... we love you. ??? ?? ??? ?? ???????????. Congratulations Team Pakistan Great Game & a fabulous comeback in the tournament. #ChampionsTrophyFinal."

Bittersweet day! congratulations team India for the splendid win at the #HockeyWorldLeague2017.. our cricket boys..to another day! #INDvPAK

Varun Dhawan, who is currently shooting for 'Judwaa 2', also took some time off from his busy schedule and noted, "In sports there is always a winner and loser. Today pakistan was the better team well played. I am sure india will come back much stronger."

Here's what some of the other celebrities also tweeted:

Dear Failure...you think you are looked down upon...but you don't realise how important you are to success....you bring on the motivation...

Congratulations Team Pakistan. Undoubtedly, the better side today in all departments.

Congratulations to the Pakistan team on winning the Champions Trophy. The better team on the day. Chin up team India, we still #BleedBlue

Yes Pakistan, you have defeated us. Well played, outplayed us in all departments. Many congratulations, I concede. Best wishes!