The actor unveiled the poster of the film on Monday, sharing his first look from the comic-thriller. 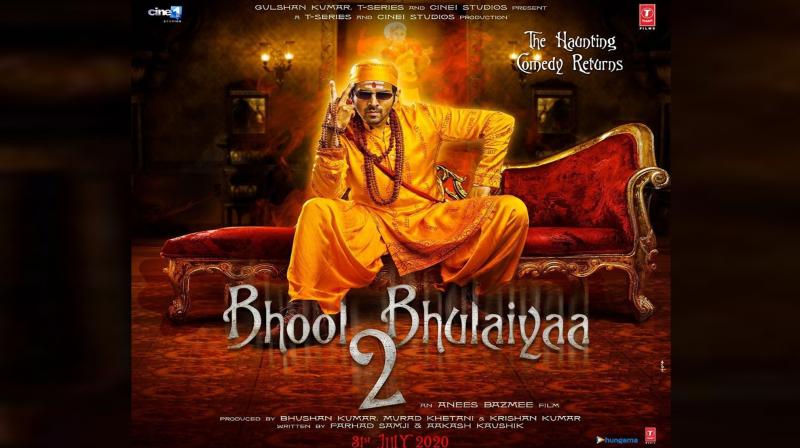 New Delhi: Stepping into the shoes of Akshay Kumar, Bollywood's next-gen star Kartik Aaryan is all set to feature in the sequel of 'Bhool Bhulaiyaa'. The actor unveiled the poster of the film on Monday, sharing his first look from the comic-thriller.

Donning a saffron colour garb of a "ghostbuster", the actor clearly resembles Akshay from the first installment. Accessorising his look well and giving it a quirky look, Kartik can be seen carrying a victory sign skeleton hand along with cool sunglasses which will just leave you in splits.

The 'Luka Chuppi' actor shared the poster on his Instagram page. "Ghostbuster is all set to enter
Hare Ram Hare Ram
Hare Krishna Hare Ram
Bhool Bhulaiyaa 2," he wrote alongside the picture.

The actor shared a series of pictures of his look from the film along with the release date. In the first picture, he can be sitting on a sofa in his saffron toga while posing with the victory sign while in the second he can be seen lying on a bed decorated with skeleton heads which added more charm to his eerie look. The film is slated to hit the theatres on July 31 2020.

The comic supernatural thriller will be helmed by Anees Bazmee, unlike the first one which was directed by Priyadarshan. The first part of the film was a remake of Malayalam blockbuster 'Manichitrathazhu' which also starred Vidya Balan, Shiney Ahuja and Amisha Patel in the lead roles.