Entertainment   Bollywood  20 Feb 2020  As you bike it
Life, More Features

As you bike it

Heroism or a sense of false bravado — the story of Bollywood’s helmetless heroes. 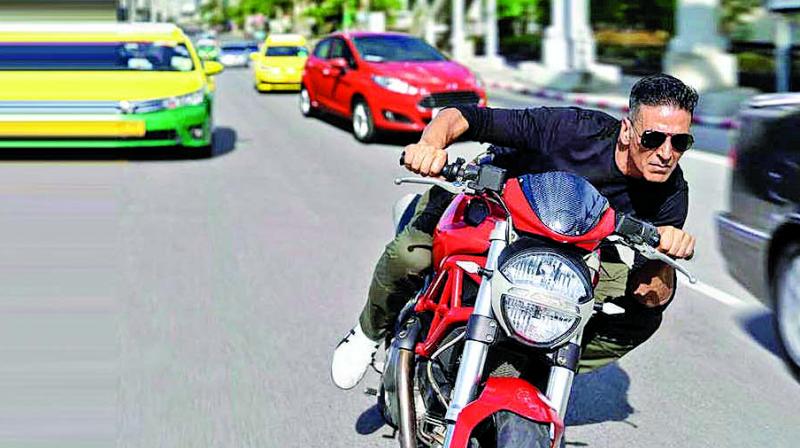 A scene from Sooryavanshi

A video of a helmetless Akshay Kumar cavorting on a motorbike with Katrina Kaif riding pillion on the sets of the film Sooryavanshi has gone viral, with social media users trolling them for not using helmets. Akshay was seen earlier in a promotional picture put out by the makers of the same film, where he is riding helmetless on the bike. For a man who also constantly endorses road safety by playing a traffic cop, and also wears a helmet when he bikes down to his film shoots, it does not seem that action speak louder than words for the action hero.

Traditionally, heroes have never worn the helmet when they are on motorbikes — Rajesh Khanna in the song Zindagi Ek Safar Hai Suhana from Andaz (1971), Amitabh Bachchan for the title song of Muqaddar Ka Sikandar (1978), Ajay Devgn in Phool Aur Kaante  (1991), Shah Rukh Khan for Koi Na Koi Chahiye in Deewana (1992), Salman Khan recently in films like Jai Ho (2014) and Race 3 (2018), and who can forget the foolhardy bikers from the Dhoom series? Namely John Abraham, Hrithik Roshan and Aamir Khan as well, apart from Abhishek Bachchan and Uday Chopra.

How can one not remember the socially responsible Aamir, whose Ghulam (1998) co-star Rani Mukerji went from sitting on his backset to sitting on the fuel tank in a mid-drive bike stunt? Incidentally, That same scene was recreated last year by a couple on a busy Delhi road indulging in PDA.

The issue has caught the attention of Kerala Transport and Road Safety Commissioner Rishi Raj Singh, who recently wrote to the Malayalam film organisations and the Central Board of Film Certification (CBFC) to make helmet and seat belt mandatory on screen. The Uttar Pradesh Transport Commissioner K Ravindra Naik also wrote a similar letter to the CEO of CBFC.

“Heroes are shown in our films performing stunts on bikes and cars, promoting such acts by youths, leading to deaths on roads. Heroes are seen without helmets while driving two-wheelers and not using seat belts while driving four-wheelers. Besides, stunts and scenes flouting traffic rules are shown in films, which promote violation by the common man. I have advised the Chief Executive Officer of CBFC not to show such scenes in our films,” Naik said. His statement is statistically supported, with over 1.5 lakh people dying annually in road accidents in India, in spite of many states making helmets compulsory, not only to riders but to pillion riders too.

Film historians say that the scene of the helmetless hero on the bike throwing caution to the wind was to ideally depict the bravado of the ‘hero’ despite that turning into foolhardy measures these days. “When such scenes came to films, it was to show how brave they were when they do not wear the helmet and the wind surfs across their face and hair. The hero entering the frame for the first time, shattering a glass pane, riding fearlessly on a bike in a song was to show how they loved living in the fast lane. In the days of yore, no one was cautious about road safety, etc. and there wasn’t too much traffic or population as well, mind you,” argues Imtiaz Baghdadi, film historian and writer.

Interestingly, villains are the ones who have often used the helmet, albeit to commit crimes without being recognised. “That is an interesting analogy. But no one copies villains,” Baghdadi retorts with a laugh.

While filmmakers may argue that such scenes are important in a film, traffic authorities are insisting to use a statutory warning like in the case of tobacco and alcohol.

“If the scene demands such acts, a statutory warning should be issued at the bottom of the screen,” avers Naik.
—Sanskriti Media