Like Sridevi's daughter Janhvi, Sara Ali Khan will, in all probability, make her debut in a Karan Johar production. 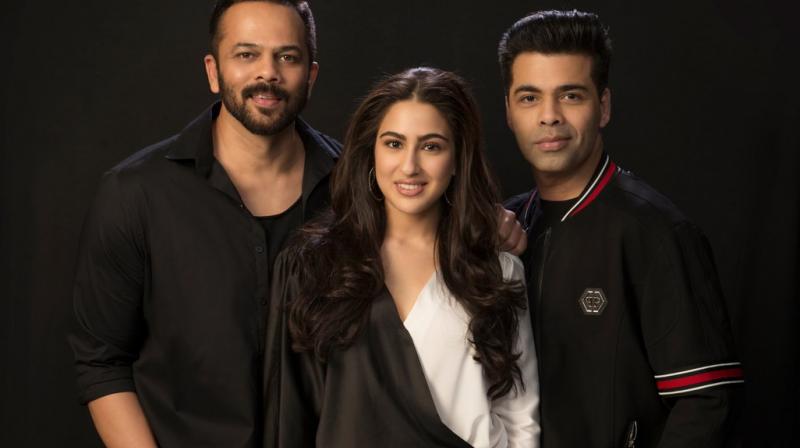 Karan Johar's Dharma Productions took to Twitter on Tuesday and posted a picture of the star kid with KJo and Rohit to announce the signing.

Sara is now set to have two releases in December in consecutive weeks, Abhishek Kapoor’s ‘Kedarnath’ opposite Sushant Singh Rajput on December 21 and this film on the 28th.

However, that’s only on paper for now as there is still uncertainty over ‘Kedarnath.’

Abhishek Kapoor and producer Prernaa Arora were at loggeheads over the film and matters taking a legal turn were also possible, before they apparently ‘patched up’.

Though Sushant-Sara-Abhishek posted a happy picture after the fracas, the shoot is currently stalled and might resume only in April.

With a substantial amount of shoot left and Prernaa not keen on clashing with Shah Rukh’s ‘Zero’ on December 21, the bone of contention between her and Abhishek which started the row, it’s likely the film will release only next year.

‘Simmba’ will thus turn out to be Sara’s debut.

Incidentally, Saif had confirmed that Karan Johar will launch Sara, before she signed ‘Kedarnath’ allegedly on Amrita’s insistence.

With how proceedings have taken place, we can only say destiny played its part well.