The actress got married to Andrei Koscheev according to traditional Hindu ceremonies in Udaipur on Tuesday. 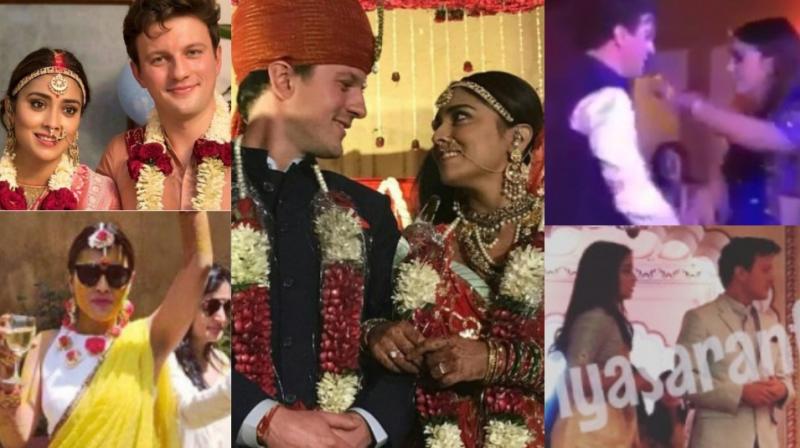 Screengrabs from the pictures and videos of Shriya Saran's wedding.

Udaipur: After maintaining suspense over her marriage to Russian sportsman and entrepreneur Andrei Koscheev on March 12, Shriya Saran finally wedded him according to traditional Hindu rituals in grand style in Udaipur on Monday.

Pictures and videos of the newlyweds have been shared by her fan clubs on Instagram and are going viral since then. The couple dressed in traditional Indian attires for the evening, with Andrei wearing a bandhgala and turban, while Shriya looked beautiful in a traditional saree and ethnic jewellery.

On Sunday evening, there was a Haldi ceremony where we see Shriya enjoying a drink, which was followed by a Holi party where we friends and well-wishers are seen dancing together.

In the evening, it was the Sangeet, where the couple is seen enjoying a dance together.

On Monday afternoon, the two got engaged by exchanging rings, and we even see Shriya’s parents in the pictures.

The wedding ceremony commenced in the evening, where we see Andrei sitting on a horse as his close ones dance in front of him in the Baraat.

After the rituals, Andrei is seen saying a speech for his wife in Hindi, "Wo pyaar nai, sauda kare. Aur Sahiba, pyaar me sauda nai hota." (In love, we don’t compromise).

Shriya replies, "You’re telling me you’ll accept all my madness? My friends thought I will change for once."

He jokes, “She is changing already,” then adds, “Love is a huge word and her love makes me better every day.”

The wedding ended with a reception, where again we see the couple dancing together.