Days after raising her voice against the Kathua and Unnao rapes, the actress is still fending off abuse from those mocking her statements. 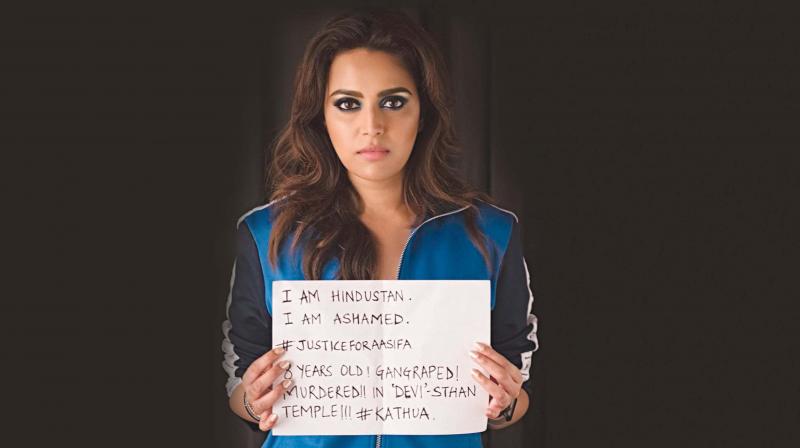 The current exception to fighting this good fight — at a great personal cost — seems to be Swara, who is still taking on trolls daily.

All of India may have reacted in rage to the Kathua and Unnao rape cases, but it takes a very brave kind of public figure to continue to ignore the huge cost of voicing an opinion. Many shocked and appalled stars and filmmakers had hit the streets and taken to their social media handles to speak up against the incidents — everyone from Kareena Kapoor Khan to Huma Qureshi, Kalki Koechlin and Shah Rukh Khan protested with the hashtag #JusticeForOurChild. But, while everyone else went back to their daily lives, actress Swara Bhaskar is still fighting off trolls. They don’t seem to be tiring of harassing her — from urging people to not watch her upcoming movie Veere Di Wedding, to hurling vulgar abuse at her, these trolls won’t let up. But, then, neither will Swara. 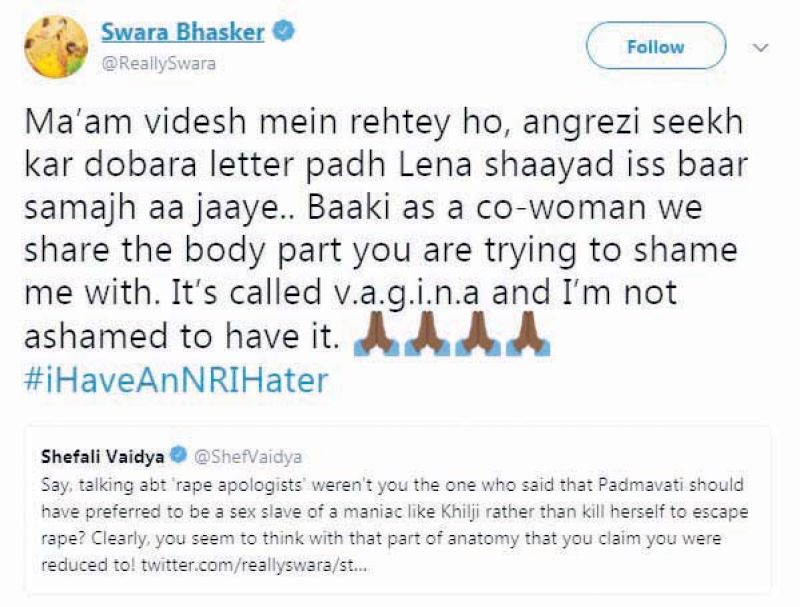 So far, days after she spoke up about the cases, the actress is still being subjected to vicious trolling, with people morphing images of her tweets mocking her intentions. Strangely, not many of her colleagues in the industry have spoken up in support of her.

Actor Prakash Raj, who has borne the brunt of malicious trolling, has lauded Swara’s efforts. “This is the tragedy of the country,” he sighs. “Those in the industry are also human. Today, when I stand for Swara, and she stands for me, we’re trolled equally. The point is that we should take things in our stride. We’re happy that at least the common man is supporting us. For every one troll, we get a hundred others who support us.”

He adds that being attacked by trolls is a given when you choose to speak up, like Swara did. “I wish the industry took responsibility and gave us the feeling that we’re in this together. They should understand it can happen to them, too,” he says.

Actress Mita Vashisht believes that this is the result of society having lost its bearings. “Earlier, the devil stayed hidden in society. The filth in a human being’s consciousness lived and died with the person. What is it today that allows this devil to show its face, to act out the bidding of its sick mind and have no fear? That’s what we have to introspect about as a nation,” she asserts.

Writer and journalist Pritish Nandy is a little more sympathetic. “Swara is brave and honest. I think many others in the movie industry too are brave and honest, and support causes like #MeToo, but have chosen not to come out and make statements because they don’t want to enter or encourage the politics of gender strife. They stand up only when specific issues that matter to them are raised,” he says.

Mita begs to differ, and says, “I think actors and actresses are a very fragile lot and very worried about their ‘careers’. The idea being that your life is either a career or it’s nothing. It’s a very limited worldview about life and even about one’s job as an actor. So, why does anyone expect anything like sublimity from them?”

The current exception to fighting this good fight — at a great personal cost — seems to be Swara, who is still taking on trolls daily. 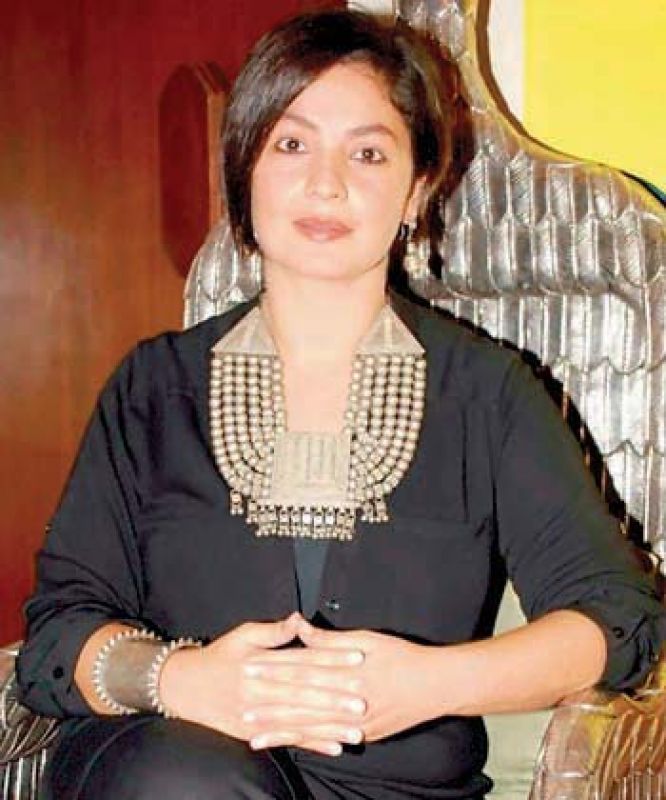 Pooja Bhatt says, “Trolls, an unfortunate reality, spew venom to provoke you. The ones who threaten harm should be reported and named. Like Mahatma Gandhi said, “No one can insult me without my permission.” I don’t give nameless, faceless people the power and permission to insult me.”

Big B mum on incidents
Amitabh Bachchan, brand ambassador of the Beti Bachao Beti Padhao campaign, has barely managed to say a word about the horrific incidents in Kathua and Unnao. At a promotional event for his upcoming film, 102 Not Out, Big B was asked about attacks on women on a regular basis. He dismissed it saying, “Iss vishay pe charcha karne ke liye mujhe ghinn aati hai. Iss vishay ko mat uchaliye [I feel disgusted discussing this issue, please don’t bring it up]. It’s terrible to even talk about it,” he said. Social media has erupted in horror at the statement.