The lead actress, Taapsee Pannu, who is also a Sikh, went on a sarcastic rampage on Twitter over the row. 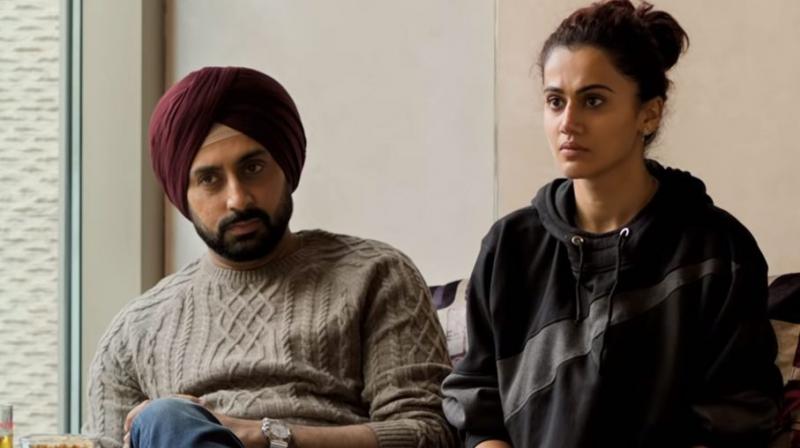 Abhishek Bachchan and Taapsee Pannu in a still from ‘Manmarziyaan.’

Mumbai: ‘Manmarziyaan’ producers have deleted three scenes from the film after members of the Sikh community objected to a scene where Abhishek Bachchan's character is shown smoking.

The producers approached the Central Board of Film Certification (CBFC) regarding the deletion of the scenes.

According to a censor copy, the three deleted scenes include a 29-second smoking sequence of Abhishek, a minute-long scene featuring Taapsee Pannu and Abhishek entering a gurudwara and an 11-second scene where Taapsee is shown smoking.

"We have removed the three scenes from the film as people's sentiments were getting hurt. The said changes have come into effect in metros from today and will reflect across India from the coming Thursday-Friday," a source from the production side told PTI.

Director Anurag Kashyap also addressed the controversy, saying there was never an intention to cause any hurt to the community, but the matter should not be politicised unnecessarily.

He said utmost care was taken while shooting the scenes, and they took guidance from the community to avoid misrepresentation.

"We asked for guidance from Sikh people for the film. When we shot the sequence in Gurudwara, we were told we can't shoot them getting married as it can't be faked so me (sic) made the actors do only 'Mattha tekna,'" Anurag, who is out of the country, said in a long tweet.

"When we shot the smoking scene, it was shot on the street, and there were close to 150 people watching the shoot. We asked before doing the scene and were told that he has to take the Turban off before he smokes away from his house. We were also shown how Robbie (Abhishek) should take the turban off with both hands and how he should hand it over and how the cousin should take it.

"It was never the intention to hurt the community and why would we do that when we got so much love from them," he added.

Anurag said he was sorry if he had caused "genuine" hurt to anyone, but asked people to not make the issue "unnecessary political because it's not."

"To those whose hurt is genuine, I offer a genuine apology, that wasn't my intention. And for those who are doing it for attention, I am glad you have got the attention.

My statement on the brewing controversy.

Meanwhile, the lead actress, Taapsee Pannu, who is also a Sikh, went on a sarcastic spree on Twitter. Confirming the news of a new edit, she sarcastically said how it ensured that, “No Sikh will ever smoke’ and that ‘no woman will ever think about ANYONE else while getting married in a Gurudwara.” She also added that she hopes it will make ‘Waheguru’ (Almighty) proud and prove her religion as ‘purest, most righteous and peaceful.’

I am sure this edit will assure that no Sikh will ever Smoke and no woman will ever think about ANYONE else while getting married in a Gurudwara. THIS surely will make Waheguru proud and assures that MY religion is the purest,most righteous and peaceful ! #Proud 👏🏼👏🏼👏🏼👏🏼

When a Twitter user pointed out how the outfits objected to a smoking scene by a Sardar, but did nothing about the addiction to drugs, Taapsee jibed that they will handle real-life issues when they are done editing the film.

I am sure waheguru and his army are aware of that too :) and just when they r done editing the film (and all other films) they will go ahead n handle these Real world issues too https://t.co/UUE8WINn3u

On Sikhs being shown drinking, she said, “Waheguru might approved of drinking but not smoking. Otherwise why will such sensible and pure n pious people protest (sic).”

I’m sure waheguru must have approved of drinking but not smoking. Otherwise why will such sensible and pure n pious people protest. https://t.co/1ZU8MvcMf0

She also slammed the protestors saying protesting against films, scenes, smoking and thinking were ‘bigger issues’ and not other issues like drug addiction in the state.

But y only that sir ? There is a pre marital relationship shown in the film m sure that’s also against a pure and righteous religion. I think u should protest against that as well. https://t.co/Z5a3shAAbV

When one of the users spoke about protesting against cutting of hair by Sikhs, she continued her tirade saying then fresh protests were needed, after which they should blur out their hair. Considering her red streaks in the film, she wondered how will she be called ‘laal pari’ anymore.

Oh shit ! All 3 of us have cut our hair 🙈 now we have to protest again! Please blur out our hair in the film. It might hurt my religion’s sentiments. 😞 now how will I be called “laal pari” 😢 https://t.co/CAD5wq1CgX

When a concerned fan felt she was inviting more trouble to the film with her menacing tweets, she replied it was because films are reduced to only social messages and religious acceptance and not for conveying a story or for entertainment.

Because movies are meant PURELY for social messages and religious acceptance. Not for conveying a story n not for Entertainment purpose FOR SURE ! https://t.co/5oyTDVQF25

Anurag also hoped that the problems of Punjab solved and Sikh youth are saved by their decision and requested to contact one of the producers, Kishore Lulla, if they felt ‘threatened’ by a film next time.

Before my tweet is taken down -Congratulations . Here by all problems of Punjab are solved and Sikh youth have been saved . Happy to be back in LaLa land again. Next time you are threatened by a film please call Kishore Lulla directly on Eros knows how to solve matters in minutes pic.twitter.com/4yqU3T9utK

After this and the controversy surrounding 'Udta Punjab', on which he was one of the producers, we wonder if Anurag will ever base his film in the state again.