The three actors and the director shared numerous pictures and messages on social media on the completion of the milestone. 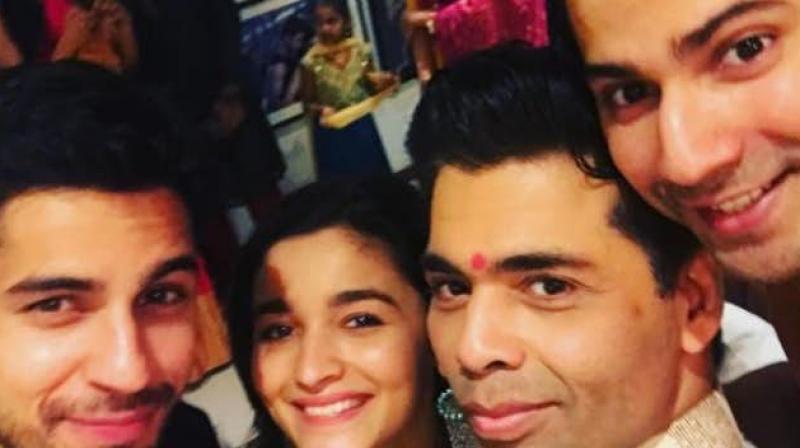 Mumbai: After working with only big stars in his first few films, Karan Johar decided to give youngsters a chance with the 2012 release 'Student of the Year' starring Alia Bhatt, Varun Dhawan and Sidharth Malhotra.

The gamble paid off with the film becoming a success and most importantly gifting three more stars to the industry.

'Student of the Year' completed the milestone of five years on Thursday and with the festival of Diwali currently underway, the team got together for a dual celebration.

The four stars recreated their ‘Disco Deewane’ step, Karan gave ‘The 5 year Speech’ and the team cut the ‘Student of the Year’ cake.

THE 5 YEAR SPEECH while cannot stop eating the delicious cake. 💙 #5YearsOfSOTY The man, the mentor and the director - @karanjohar celebrates with his favorite students!🎉 @s1dofficial @varundvn @aliaabhatt

All the four celebrities also posted touching messages on their social media handles on the completion of the milestone, thanking each other for their respective contribution in the journey.

Love you @karanjohar my father my friend.. thank you for making this day happen! Couldn't have asked for a better opening to my story :)

And to the best boys ever! @S1dharthM @Varun_dvn so happy we started off together and were totally clueless together 😂 love you both ❤️❤️

Thank you guys have seen the trends and the love world over it's a very special days today. 5 years but I'm still a student @karanjohar ❤️🏃

#5YearsOfSOTY #5YearsOfVarunDhawan thank you will work harder. You guys have stood with me from the begin thank you https://t.co/s9s9PSLES6

We shot Radha on the first day & I remember how nervous @varun_dvn, @aliaa08 & me were. SOTY will always be special. Thank You @karanjohar pic.twitter.com/tnJ8poFkG4

Even Karan’s twins Yash and Roohi joined in the celebrations where they were obviously the centre of attraction, with Ayan Mukerji also being spotted. Varun also shared a picture with Roohi, calling her the 'most beautiful girl in the room.'

Loveeeee with the most beautiful girl in the room pic.twitter.com/acKrudipej

Sridevi’s daughter Jhanvi and Shahid Kapoor’s brother Ishaan Khatter are reportedly going to be to be launched in a similar grand manner with the ‘Sairat’ remake, and it would be interesting to see if they can replicate the success of the 'Students.'

Tags: student of the year