The upcoming feature is the sequel to the 2017 hit 'Shubh Mangal Saavdhan' which starred Ayushmann opposite Bhumi Pednekar. 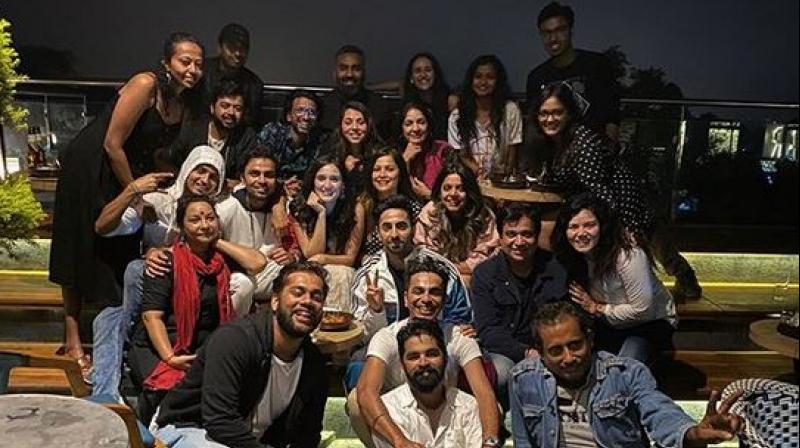 Mumbai: Ayushmann Khurrana is known to do classic social films, and the next being ‘Shubh Mangal Zyada Saavdhan’. He is essaying the role of a gay lover. The teaser which was released a few days back showed Ayushmann getting ready to marry Pankhuri Awasthy, though he never confesses on what he feels for the other guy.

Now the latest update is that, the Banaras schedule of Ayushmann Khurrana starrer 'Shubh Mangal Zyada Saavdhan' has come to an end and after long hours of work and shoots, the team gathered for a celebration to mark their last night in the city!

The crew enjoyed a get together on Tuesday night and Pankhuri who is essaying the role of Kusum in the film documented their last night in the city.

Pankhuri took to Instagram to post about the shooting scenes. She said, “Banaras Schedule wrap party with the #smzs team!"

The upcoming feature is the sequel to the 2017 hit 'Shubh Mangal Saavdhan' which starred Ayushmann opposite Bhumi Pednekar.

While the first instalment followed the story of a man suffering from erectile dysfunction, the second one will see a homosexual love story and the 'Article 15' actor will be seen romancing Jitendra Kumar.

Also starring in the film are Pankhuri, Manushri Chaddha, Maanvi Gagroo and Neeraj Singh in pivotal roles. The film is set to release on March 13, 2020.