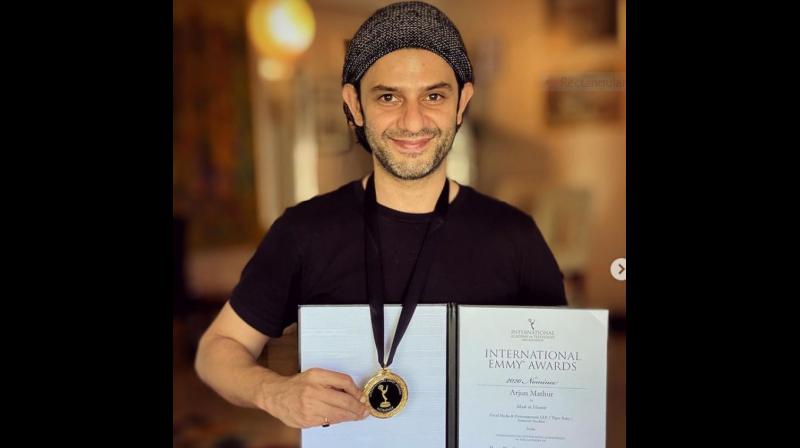 Arjun is the only Indian actor to receive a nomination in the ‘Best Performance by an Actor’ category at the International Emmy Awards 2020 for Zoya Akhtar’s Made in Heaven, in which he plays the role of a homosexual wedding planner.

Responding to our congratulations on the achievement, the actor described it as a “surreal” feeling and said he was overwhelmed when he received a call from his co-actor in the series informing him about the nomination. “I have been getting calls and it’s been a great feeling. My medal and nomination certificate that were stuck in the customs have finally reached my house, and I finally got to share it with everyone on social media. Now it feels like it’s happening for real,” he shares.

All in a day’s work

Arjun’s insightful portrayal of a gay character won accolades not only from film critics and movie buffs but from the LGBTQI community as well. Speaking about the reactions, he says, “The brief for me was to play the role of an alpha male who happens to sleep with men. When the first season of the show was released, I got good reviews, but it wasn’t an overnight superstardom experience. I would get DMs from people who thanked me and shared their individual coming out stories. This to me is the real satisfaction, and I feel blessed that as an actor I could make a difference in someone’s life.”

Arjun recently bagged a fashion endorsement deal with a popular clothing brand. However, ironically, he calls himself a “fashion failure.” “I am not a fashion-conscious person, and comfortable casual clothes are my style,” he reveals.

For the greater good

The actor has also pledged to donate his organs and is part of an on-going initiative to spread awareness about the subject. Describing it as an issue close to his heart, he says, “Two years back, my brother needed a kidney and we couldn’t find a match for a long time. Luckily, we were able to get a donor at the last minute. Donating organs can save someone’s life.”

Born in Britain, Arjun grew up in Mumbai and New Delhi, and trained in acting at Barry John’s Institute and Lee Strasberg Theatre and Film Institute, New York. He also worked as an assistant director in Bunty Aur Babli and Rang De Basanti, and acted in films like Luck By Chance, My Name Is Khan,  Barah Aana, Coffee Bloom, I Am and Fireflies, for which he received the best actor nomination at the New York Indian Film Festival in 2013. He wants to play character roles without being stereotyped in any one medium.

More in the pipeline

At a time when Indian viewers want something beyond cinema and DTH, shows like Made In Heaven (MIH) on OTT platforms, have been very popular. He is currently wrapping up The Gone Game Season 2 and Lord Curzon Ki Haveli along with some other projects. MIH Season 2 will be announced soon.