Amidst the nepotism debate, Karan once asked Kangana to leave the industry, if she wasn’t happy with its functioning. 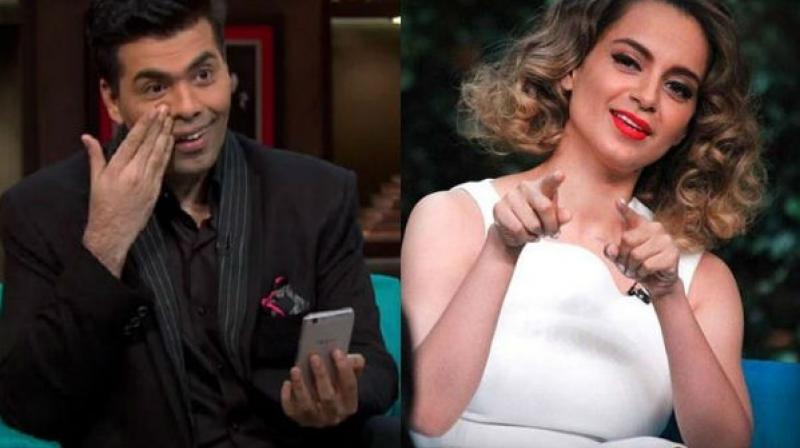 Mumbai: Karan Johar recently had an interview with Barkha Dutt at Town Hall, where Barkha attacked him with many questions surrounding his and Kangana’s vendetta over the nepotism statement.

Kangana had targeted Karan as the ‘flag-bearer of nepotism’ on the latter’s chat show.

At the interview, Karan was asked if he was literally a nepotistic or sexist on his show, when the remark was made on him. To which the filmmaker added, “I was not at all. I felt like I was attacked, she was the missile and I was the target. I was not being nepotistic or sexist, I was just like she has her opinion and she is giving her thoughts. She clearly learned those 12 lines and came and they were wonderful. Even I learn my lines for any interview, these are not criticism.”

"She had an opinion, she is an exceptional talent and I have always said that. She has her opinion and she said it. Two weeks later, I was given a platform and I said what I had to. I don't know what to say, what she meant, whereas I have never crossed paths with her beyond here and there. She decided to choose me, to make her point which is fine," added the flamboyant Karan.

Amidst the nepotism debate, Karan once asked Kangana to leave the industry, if she wasn’t happy with its functioning.

When he was questioned about making this statement, he adamantly said, “I meant that if you have so many issues and you are still going on with other beats of life, I gave her an option like she gave me one. I have no regrets of being insensitive. I firmly believe she is an exceptional talent.”

"I don't hate Kangana and she doesn't hate me. And I don't regret my words. We are adults and I will probably call her for my next party and I forgot to call for the last one. I would love to call her because I have a great amount of regard for her. She wasn't attacking me, she was blaming me for something and I was defending for the same," concluded the filmmaker.

Many Bollywood celebrities came upfront to express their opinions about the existence of nepotism in Bollywood.