Talking about the crass trolls, the actress further adds, “Can I kiss your navel, is what someone messaged me on social media 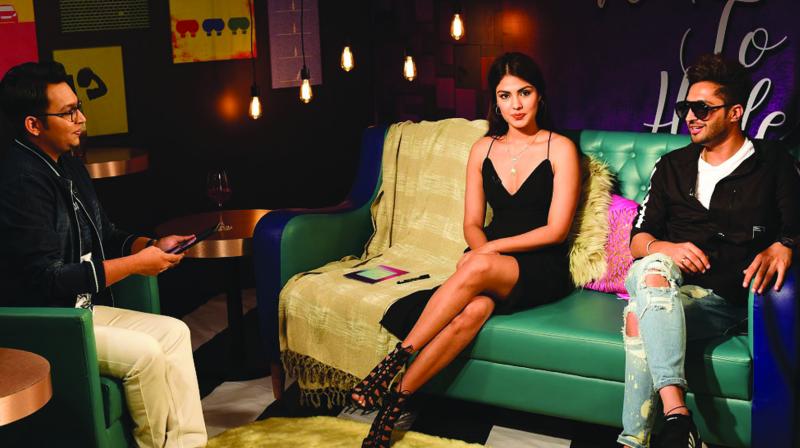 A still from the show

Recent celebrity talk shows have become a destination for actors to indulge in #NothingToHide conversations with Bollywood celebrities! While on the last episode of the same show, Nora Fatehi made shocking revelations about her break up with Angad Bedi, the upcoming episode, featuring Rhea Chakraborty and Jassi Gill promises to be episode of unfiltered conversations and fun. Opening up about dealing with pressure on social media, Rhea confided to the host, Renil Abraham that, "When you are a female on social media, there is a lot more scrutiny one goes through”. Rhea also shares that “Shraddha Kapoor and I discuss how much vanity is enough because the upkeep is very difficult”. Talking about the crass trolls, the actress further adds, “Can I kiss your navel, is what someone messaged me on social media".

Unhappy with the ongoing trolling culture, Jassi Gill revealed on the show, "There is a lot of unemployment in India and some of them have made trolling their profession. They used to call me ‘fukra’ and 'wannabe'. Earlier, I used to react because I used to think, 'what wrong have I done to get trolled?”.

Walking down memory lane, Rhea revealed on the show, “I was going through my first heartbreak when I was being auditioned by Shaanoo Sharma. Shaanoo said something was different and made me audition an emotional scene, and I cried, without any glycerine. I had auditioned for the same film several times. This got me my first film, a film with zero crying scenes.”

During the last leg of the show, Renil plays fun-filled games with the celebrities. Rhea is asked to Kill, Marry, Hook up, with her options being Varun Dhawan, Siddharth Malhotra, Zaheer Iqbal, and the actress is quick with her choices and says, “I would Marry Varun Dhawan because we are friends, Hook up with Siddharth Malhotra because he is hot, Kill Zaheer Iqbal and then call him and apologise.” On the other hand, Jassi when asked to name a celebrity who should stop singing, with a waggish expression names Sonakshi Sinha.